On August 25, 2009 from 1:00 p.m. until 2:30 p.m., Ames Research Center will conduct a ceremonial groundbreaking and dedication event for what we expect will become the highest performing building in the federal government.

Named Sustainability Base, our new building will be a showplace for sustainable technologies, featuring “NASA Inside” through the incorporation of some of the agency’s most advanced recycling and intelligent controls technologies originally developed to support NASA’s human and robotic space exploration missions.

In this 40th anniversary year of the Apollo 11 landing on the Moon and humanity’s first historic steps onto the surface of another world, we have chosen the name Sustainability Base as an homage to the original “Tranquility Base” and the brave astronauts and other men and women of NASA who accomplished what is generally regarded to be the defining event of the twentieth century.

We believe that Sustainability Base will serve as a window to the future of humankind and a symbol of NASA’s continuing leadership in seeing, understanding and benefiting life on Earth. 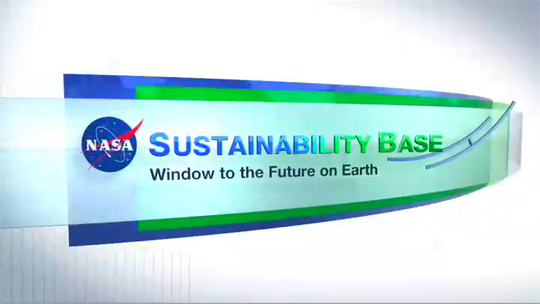 Under the terms of the contract, the company will construct a building, named the NASA Sustainability Base, in honor of the Tranquility Base of the Apollo 11 moon landing. The building is designed to incorporate some of the agency’s most advanced recycling and intelligent control technologies originally developed to support NASA’s human and robotic space exploration missions.

The building is designed to achieve a platinum rating under the Leadership in Energy and Environmental Design new construction standards for environmentally sustainable construction developed by the U.S. Green Building Council, Washington. In order to achieve sustainability, the building will have zero net energy consumption, use 90 percent less potable water than conventionally built buildings of equivalent size and reduce building maintenance costs.

The company will prepare the site and utilities by installing approximately 72 geothermal wells utilizing ground-source heat pumps, parking and landscaping with California-native plants. In addition, the company also will install sophisticated systems for solar water heating, fire detection and suppression, advanced lighting, security, communications operations and site storm water management. These systems will be designed to anticipate and react to changes in sunlight, temperature, wind, and use of resources and will automatically optimize the building’s performance.

The new facility will feature a structural steel frame, stand two stories tall with two wings and will have approximately 50,000 square feet of open office space, lunchrooms and a glass-walled atrium.

To watch a video about the Sustainability Base to be built at NASA’s Ames, visit: http://www.nasa.gov/centers/ames/greenspace/sustainability-base.html

For more information about the Greenspace Initiative at NASA’s Ames, visit: http://www.nasa.gov/centers/ames/greenspace