This image was taken by the microscopic imager onboard NASA’s Mars Exploration Rover Spirit on sol 99 (April 13, 2004). It is a close-up look at a portion of the rock called “Route 66,” which was brushed by the rover’s rock abrasion tool.

This image intrigues scientists because it looks very different from the microscopic images taken of other brushed rocks at the Gusev Crater location. The surface of Route 66 is very shiny and specularly reflective, which may indicate a glassy surface, or perhaps a very smooth, discontinuous coating. The unique coating appears mottled and may be multi-layered.

Other interesting features in this brushed area of Route 66 are the very thin, arc-shaped lines that are visible in the upper left quadrant of the image. An initial hypothesis suggests that these arcs may have been caused by the rock abrasion tool when the instrument made its initial contact with the surface.

Scientists will use the combined data from the rover’s Mössbauer spectrometer and alpha particle X-ray spectrometer along with color versions of this image to try to reach stronger conclusions about what they are seeing and what processes caused the features. 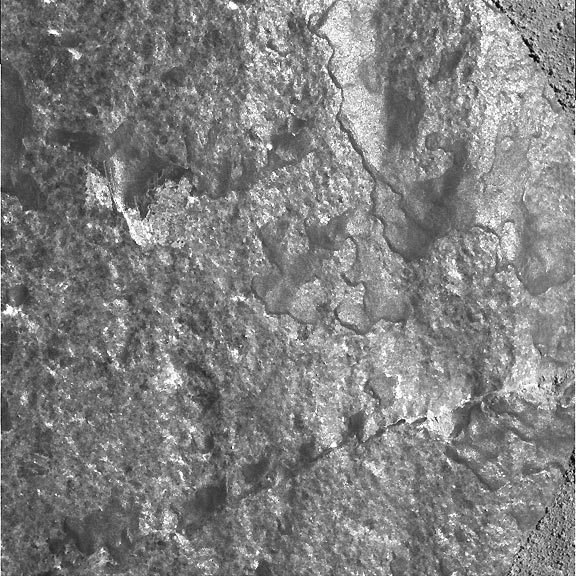