A rock outcrop with a view of the surrounding landscape beckons NASA’s Mars Exploration Rover Spirit on sol 203 (July 29, 2004) of its journey of exploration on the red planet. This view is a mosaic of images taken by the rover’s navigation camera at a position labeled as Site 80, near the top of the “West Spur” portion of the “Columbia Hills.” Directly ahead are rock outcrops that scientists will examine for clues that might indicate the presence of water in the past. In the upper right-hand corner is the so-called “sea of basalt,” consisting of lava flows that lapped onto the flanks of the hills. The view is toward the south. The field of view is approximately 170 degrees from right to left and is presented in a cylindrical projection with geometrical seam correction. 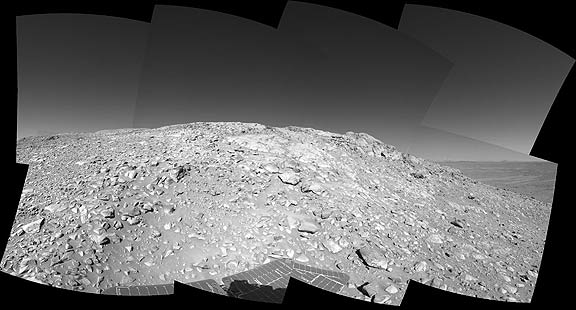