A view of the sky as observed by the mini-thermal emission spectrometer onboard the Mars Exploration Rover Spirit. This instrument detects the different wavelengths of infrared light emitted by an object, in this case the sky, producing a graph called a spectrum that reveals the presence of specific chemicals. This spectrum, taken on Sol 7 in the early afternoon (night of January 9/10, 2004), contains the signatures of carbon dioxide (15 microns), atmospheric dust (9 microns) and water vapor (6 microns). Scientists also expect to see water ice clouds in the martian atmosphere, but did not observe them at the time of this observation. The thermal brightness of carbon dioxide allows the atmospheric temperature as a function of height to be determined. Carbon dioxide makes up 95 percent of the martian atmosphere. 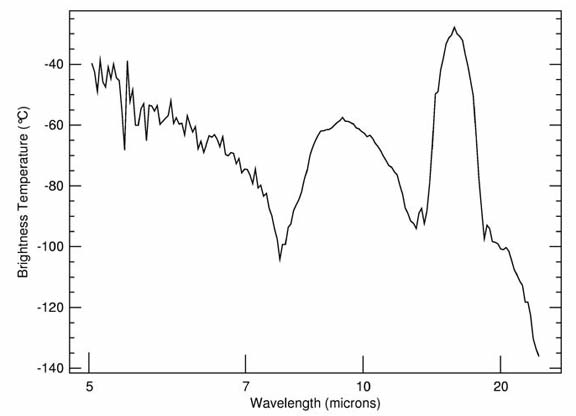