SS011-E-11806 (14 August 2005) — Mount McKinley, Alaska is featured in this image photographed by an Expedition 11 crewmember on the International Space Station. This view of the highest point in North America (20,230 feet) looks as if it were taken from an aircraft.

The Station crewmember took advantage of cloud free skies and the powerful 800 mm lens to photograph this peak, fully 800 miles to the north of the spacecraft, which was located over the Gulf of Alaska. The powerful lenses are difficult to use, requiring motion compensation by the astronaut, so that these kinds of detailed images of horizon detail are seldom taken.

The rising sun casts long shadows across the Kahiltna Glacier that angles down from Mt. McKinley (lower left).

Other glaciers with moraine lines appear at far left and far right. Despite the blueness inherent in images taken at great distance, this image also shows unusually dense atmospheric haze at lower altitudes: all the valleys in the foreground appear murky due to forest fire smoke. 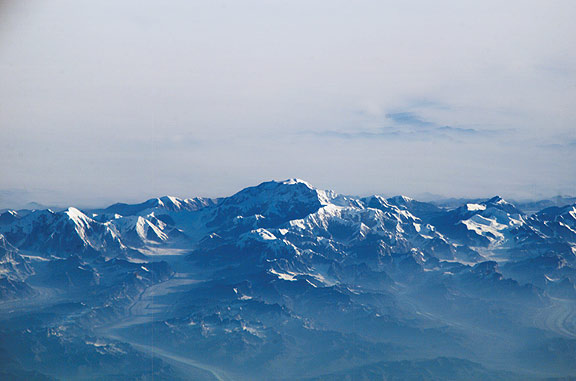