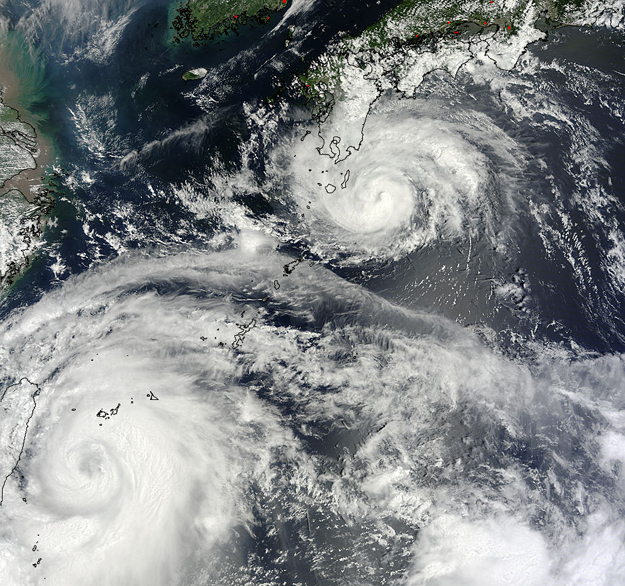 NASA satellites have been tracking the twin tropical troublemakers, providing forecasters at the Joint Typhoon Warning Center with visible, infrared and microwave imagery. The Moderate Resolution Imaging Spectroradiometer (MODIS) instrument on NASA’s Terra satellite captured an image of Typhoon Saola approaching Taiwan, and Typhoon Damrey approaching southern Japan on August 1 at 0200 UTC (July 31 at 10:00 p.m. EDT). Saola appeared much larger than the less intense Damrey. Saola also has an eye, although it was obscured by high clouds in the MODIS image.

On August 1 at 1500 UTC (11 a.m. EDT) Typhoon Damrey had maximum sustained winds near 65 knots (75 mph/120.4 kmh). It was centered 175 nautical miles (201.4 miles/324.1 km) southeast of Jeju-Do, Korea, near 31.3 North and 127.7 East. Damrey is moving to the west-northwest at 15 knots (17.2 mph/27.7 kmh). The Joint Typhoon Warning Center noted today, August 1, “Infrared satellite imagery shows that there was persistent and deep spiral band convection over the low-level circulation center.” Damrey is expected to weaken by Thursday, August 2 when it travels through an area of cooler sea surface temperatures off the coast of Shanghai, just before it makes landfall.

In Taiwan, the cities of Taipei, New Taipei, Taichung, Chiavi, Tainan, Keelung, Hsinchu, and Kaosiung are under warning. In addition, warnings have been posted for the counties of Changhua, Chiayi, Hsinchu, Hualien, Lienchiang, Miaoli, Nantou, Taoyuan, Taitung, Yilan, and Yunlin.

Typhoon Saola is in an area more favorable for strengthening than Damrey, because sea surface temperatures around Saola are warmer than where Damrey is located. Because of the warmer sea surface temperatures and improving upper atmospheric conditions, forecasters at the Joint Typhoon Warning Center expect Saola to continue intensifying over the next day before interacting with land and weakening. Saola is expected to make landfall south of Shanghai on August 3.

For an unlabeled, high-resolution MODIS image of the storms, visit: http://lance-modis.eosdis.nasa.gov/cgi-bin/imagery/single.cgi?image=Saola_Damrey.A2012214.0200.2km.jpg.