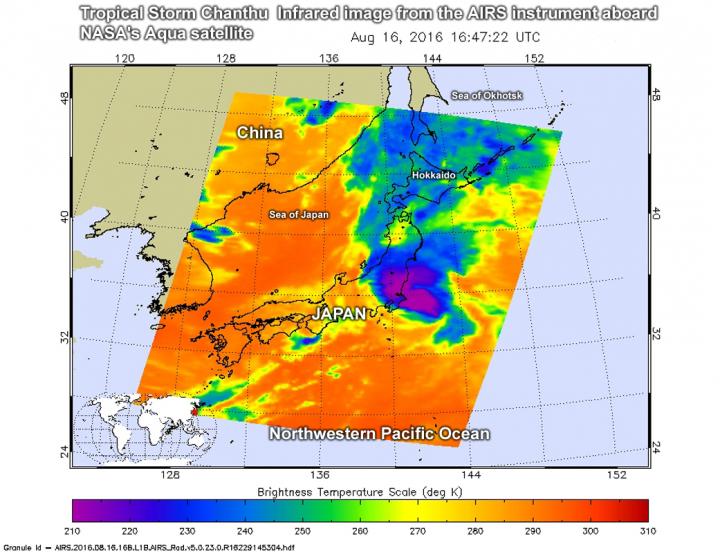 Although the storm appeared elongated, strong thunderstorms were still occurring around the center of circulation although they appeared to be weakening. Some cloud top temperatures of the strongest storms exceeded minus 63 degrees Fahrenheit (minus 53 degrees Celsius). Storms with temperatures that cold are high in the troposphere and NASA research has shown they have the ability to generate heavy rain. The storm also appeared somewhat elongated from northwest to southeast, likely as a result of interaction with land.

At 11 p.m. EDT on Aug. 16 (0300 UTC on Aug. 17) the Joint Typhoon Warning Center issued their final warning on Chanthu. At that time the tropical storm was located approximately 171 nautical miles north-northeast of Yokosuka, Japan. Maximum sustained winds were near 40 mph (35 knots/62 kph). Chanthu has tracked northwestward at 15 knots (17.2 mph/27.7 kph).

The Joint Typhoon Warning Center (JTWC) forecast noted that vertical wind shear is rapidly increasing (25 to 30 knots) as Chanthu tracks along the western edge of a subtropical ridge (elongated area of high pressure). The storm is transitioning into an extra-tropical storm today and is expected to move into the Sea of Okhotsk.