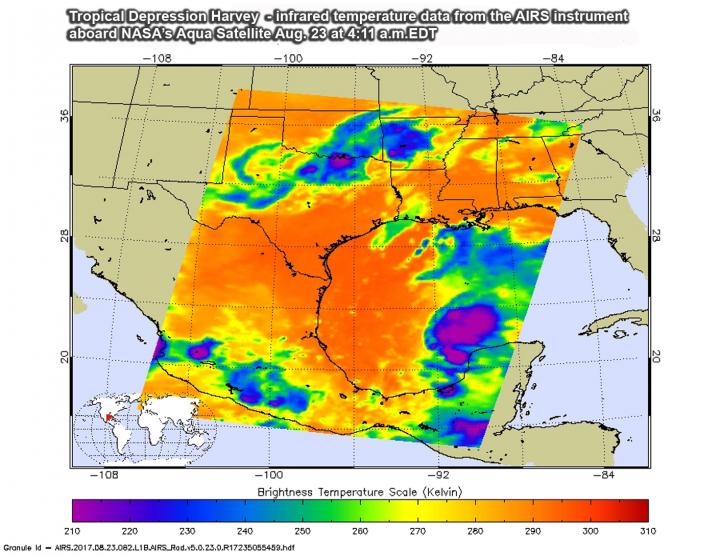 At 11 a.m. EDT on Aug. 23, Harvey regenerated into a tropical depression in the Gulf of Mexico. The National Hurricane Center issued hurricane and storm surge watches for portions of the Texas coast as Harvey is expected to strengthen.

The Atmospheric Infrared Sounder or AIRS instrument that flies aboard NASA’s Aqua satellite analyzed Harvey in infrared light on Aug. 23 at 4:11 a.m. EDT (0811 UTC). AIRS data showed Harvey’s cloud pattern was still not well-organized and the cloud pattern is asymmetric. There were however, some strong thunderstorms within with very cold cloud top temperatures. Some of the coldest cloud top temperatures exceeded minus 63 degrees Fahrenheit (minus 53 degrees Celsius). Storms with temperatures that cold are high in the troposphere and NASA research has shown they have the ability to generate heavy rain.

That heavy rain is in the forecast for Texas and Louisiana, according to the National Hurricane Center (NHC). NHC noted “Harvey is expected to produce total rain accumulations of 10 to 15 inches with isolated maximum amounts of 20 inches over the middle and upper Texas coast and southwest Louisiana through next Tuesday, with heavy rainfall beginning as early as Friday morning, Aug. 25.”

The depression was moving toward the northwest near 9 mph (15 kph) and a track toward the northwest or north-northwest is expected for the next 48 hours. On the forecast track, Harvey should be approaching the Texas coast late Friday, Aug. 25. Maximum sustained winds are near 35 mph (55 km/h) with higher gusts. Some strengthening is forecast during the next 48 hours, and Harvey could become a hurricane on Friday.