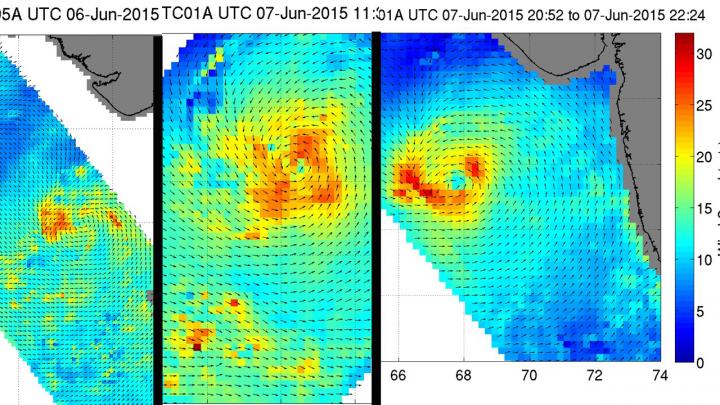 Tropical Cyclone 01A has been moving in a northerly direction through the Northern Indian Ocean, and is now curving to the west, moving into the Gulf of Oman. NASA’s Aqua satellite and RapidScat instruments gathered imagery and data on the storm. Three days of RapidScat imagery showed how sustained winds increased around the entire storm.

RapidScat is a scatterometer instrument that flies aboard the International Space Station and can measure surface winds over the ocean. On June 6, 7, and 8, RapidScat collected wind data on the strengthening tropical storm. RapidScat passed over TC01A on June 6 and gathered wind speed information from 21:44 to 23:16 UTC (5:44 p.m. to 6:16 p.m. EDT). Strongest sustained winds during that time period were near 20 meters per second (mps)/44.4 mph/72 kph) on the western side of the center.

RapidScat wind data on June 7 was taken from 11:37 to 13:09 UTC (7:37 to 9:09 a.m. EDT). By that time sustained winds had extended around the entire center of circulation with maximum sustained winds between 20 and 25 meters per second. On June 8, the strongest winds were not uniform around the entire storm. The weakest winds were on the northern side near 21 mps/46.9 mph/75.6 kph). The strongest maximum sustained winds had increased in the western, southern and eastern quadrants to near 30 mps/67 mph/108 kph).

On June 8 at 09:10 UTC (5:10 a.m. EDT), the Moderate Resolution Imaging Spectroradiometer aboard NASA’s Aqua satellite captured a visible image of Tropical Cyclone 01A (TC01A) in the Arabian Sea. The MODIS image showed a concentration of strong thunderstorms surrounding the center, with a slight hook feature northwest of the center.

The Joint Typhoon Warning Center noted that the upper level environment is “moderately favorable with 20 to 25 knots (23 to 28.7 mph/37 to 46.3 kph) of vertical winds shear, offset by good poleward outflow.” TC01A is moving under the influence of a strong high pressure area centered over northern India. The clockwise motion of the high pressure area is helping take the tropical cyclone in a northerly direction.

However, in the next day and a half (by June 10), the JTWC noted there will be “a small break in the overall steering environment, causing the system to move very slowly and take on a more northward track through that break. At this time the system will intensify to its peak of 70 knots (80.5 mph/129.6 kph). In the extended forecast, TC01a will continue to take on a more westward track.”

TC01A is expected to intensify to hurricane-strength by June 10 and then weaken back to tropical storm status before reaching the entrance of the Gulf of Oman sometime on June 12. The Gulf of Oman separate the country of Oman to the south and Iran to the north.