The Eastern Pacific Ocean’s potential tropical cyclone has developed into Tropical Storm Lidia. NASA’s Aqua satellite observed some very high, towering thunderstorms in two areas of the storm and because of its close proximity to land, warnings are already in effect for areas in Mexico. 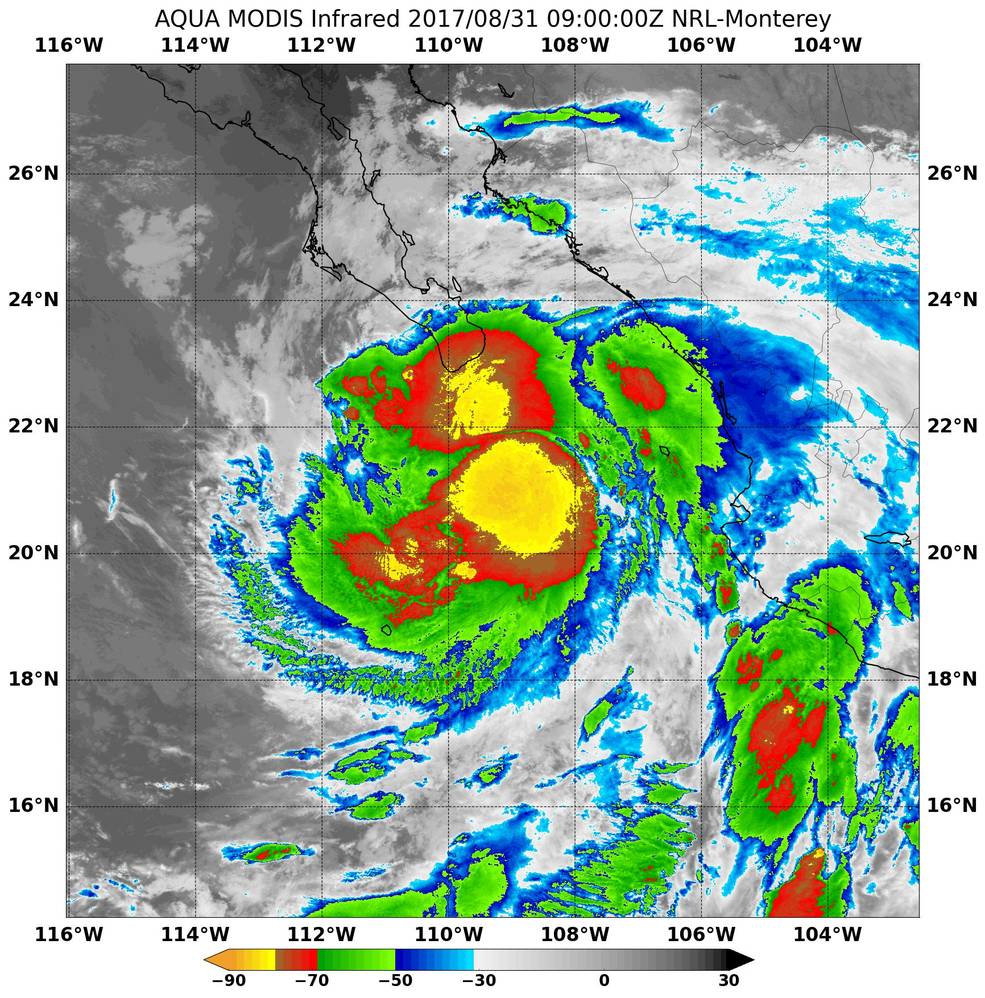 NASA’s Aqua satellite captured infrared temperature data of newly developed Tropical Storm Lidia on Aug. 31 at 5 a.m. EDT (0900 UTC). Strong storms around the center, and north of the center (yellow) were as cold as minus 80 degrees Fahrenheit (minus 62.2 Celsius). Credits: NRL/NASA

Infrared MODIS data showed two areas with very cold cloud top temperatures of strong thunderstorms. They were around center of circulation and north of the center, where temperatures were as cold as minus 80 degrees Fahrenheit (minus 62.2 Celsius). Temperatures that cold indicate strong uplift in the storm and cloud tops high into the troposphere. NASA research has shown that storms with cloud tops that cold have the ability to generate heavy rain.

That heavy rain is part of the forecast from the NHC:  Lidia is expected to produce total rain accumulations of 8 to 12 inches across the Mexican states of Baja California Sur into Baja California and western Jalisco, with isolated maximum totals of 20 inches. In the Mexican states of Sinaloa, Nayarit, Colima, southern Michoacan, southern Sonora and central Jalisco, rainfall amounts of 3 to 6 inches are expected. These rains are expected to cause life-threatening flash floods and mudslides.

Lidia was moving toward the north-northwest near 9 mph (15 kph) and this general motion is expected to continue through Friday, Sept. 1 with a turn toward the northwest expected Friday night.  NHC said, on the forecast track, the center of Lidia will be near the southern tip of the Baja California peninsula during the next several hours, and will move over the peninsula through Friday night. Maximum sustained winds have increased to near 50 mph (85 kph) with higher gusts. The estimated minimum central pressure is 994 millibars.

NHC said some additional strengthening is possible today. Weakening is expected tonight through Friday night as the center moves over the Baja California peninsula.