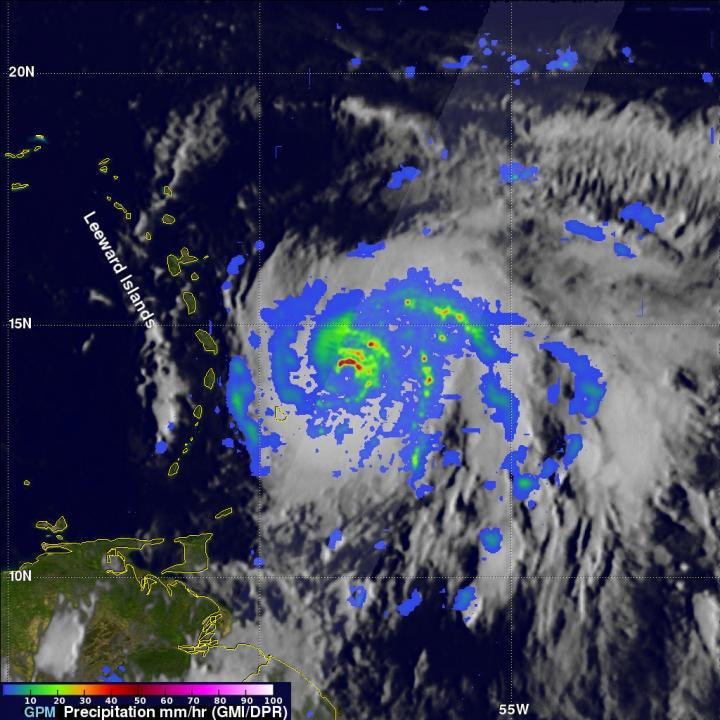 Warnings and Watches on Sept. 18

The Global Precipitation Measurement mission (GPM) core observatory satellite had an excellent view of hurricane Maria when it passed almost directly above the hurricane on Sept. 17, 2017 at 1001 p.m. AST/EDT (Sept. 18 0201 UTC). GPM’s Microwave Imager (GMI) and Dual-Frequency Precipitation Radar (DPR) showed that Maria had well defined bands of precipitation rotating around the eye of the tropical cyclone. GPM’s radar (DPR Ku band) found rain falling at a rate of over 6.44 inches (163.7 mm) per hour in one of these extremely powerful storms northeast of Maria’s eye.

NASA obtained a look at Maria’s precipitation structure using data from GPM’s Radar (DPR Ku band). Intense thunderstorms were found towering to above 9.7 miles (15.7 km). This kind of chimney cloud, also called a “hot tower” (as it releases a huge quantity of latent heat by condensation). These tall thunderstorms in the eye wall are often a sign that a tropical cyclone is becoming more powerful.

A “hot tower” is a tall cumulonimbus cloud near the center of a tropical cyclone, often seen prior to intensification. The cloud tops reach at least to the top of the troposphere, the lowest layer of the atmosphere which is approximately 9 miles/14.5 km high in the tropics. These towers are called “hot” because they rise to such altitude due to the large amount of latent heat. Water vapor releases this latent heat as it condenses into liquid. Those towering thunderstorms have the potential for heavy rain. Energy released by rainfall into the center of a tropical cyclone provides the energy upon which tropical cyclones thrive.

The Atmospheric Infrared Sounder or AIRS instrument aboard NASA’s Aqua satellite analyzed Hurricane Maria in infrared light. Infrared light provides scientists with temperature data and that’s important when trying to understand how strong storms can be. The higher the cloud tops, the colder and the stronger they are. So infrared light as that gathered by the AIRS instrument can identify the strongest sides of a tropical cyclone.

At NASA’s Goddard Space Flight Center in Greenbelt, Md. the NASA/NOAA GOES Project created an animation of NOAA’s GOES East satellite imagery from Sept. 14 at 1:45 p.m. EDT (1745 UTC) to Sept. 18 ending at 7:45 a.m. EDT (1145 UTC). The animation shows Hurricane Jose moving north along the U.S. East coast, the development strengthening of Hurricane Maria and its approach to the Leeward Islands, and Tropical Depression Lee in the Eastern Atlantic.

NHC noted the estimated central pressure inside the 10 nautical mile-wide eye has fallen to 959 millibars. The small eye is also apparent in radar data from Martinique.

Maria was moving toward the west-northwest near 10 mph (17 kph), and this motion with some decrease in forward speed is expected through Tuesday night, Sept. 19. On the forecast track, the center of Maria will move across the Leeward Islands late today and tonight, over the extreme northeastern Caribbean Sea Tuesday and Tuesday night, and approach Puerto Rico and the Virgin Islands on Wednesday, Sept. 20.

Reports from an Air Force Reserve Hurricane Hunter aircraft indicate that maximum sustained winds have increased to near 120 mph (195 kph) with higher gusts. Maria is a category 3 hurricane on the Saffir-Simpson Hurricane Wind Scale. Additional rapid strengthening is forecast during the next 48 hours, and Maria is expected to be a dangerous major hurricane as it moves through the Leeward Islands and the northeastern Caribbean Sea.

NHC expects Maria’s eye to move through the Leeward Islands during the afternoon or evening today, Sept. 18.

For updates on Maria, visit: http://www.nhc.noaa.gov