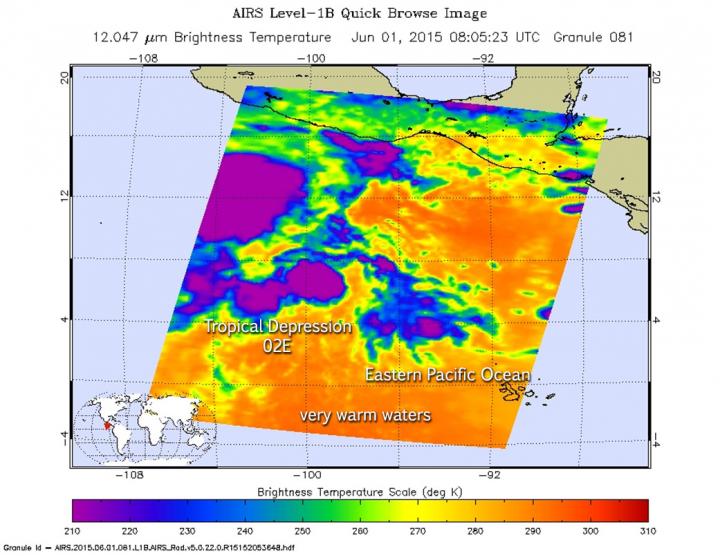 Today, Monday, June 1, Hurricane Andres was a powerful category 4 hurricane on the Saffir-Simpson Scale and until today when Andres moved far enough away to stop suppressing the development of System 93E and allowed it to consolidate into Tropical Depression 02E (TD02E).

When NASA’s Aqua satellite passed over TD02E on June 1 at 8:04 UTC (4:04 a.m. EDT), the Atmospheric Infrared Sounder or AIRS instrument gathered data on the storm in infrared light. Infrared light shows temperature and measurement of cloud top temperatures provides valuable data on cloud heights. The higher the thunderstorms that make up a tropical cyclone, the colder they are, and the stronger the storm. In addition, stronger storms with temperatures at least as cold as -63F/-52C have the potential to drop heavy rainfall, which is what AIRS detected in the storms surrounding TD02E’s center.

At 5 a.m. EDT (0900 UTC), on June 1, the center of Tropical Depression Two-E was located near latitude 13.3 North, longitude 104.0 West. The National Hurricane Center (NHC) noted that the depression is moving toward the northwest near 6 mph (9 km/h). A slow west-northwestward to northwestward motion is expected today, followed by little motion tonight and Tuesday. Maximum sustained winds are near 35 mph (55 km/h) with higher gusts. The estimated minimum central pressure is 1006 mb (29.71 inches).

NHC forecasters said that TD02E is expected to become a tropical storm later in the day today, June 1.