By SpaceRef Editor
May 29, 2015
Filed under Earth, Earth Science, NASA HQ, US 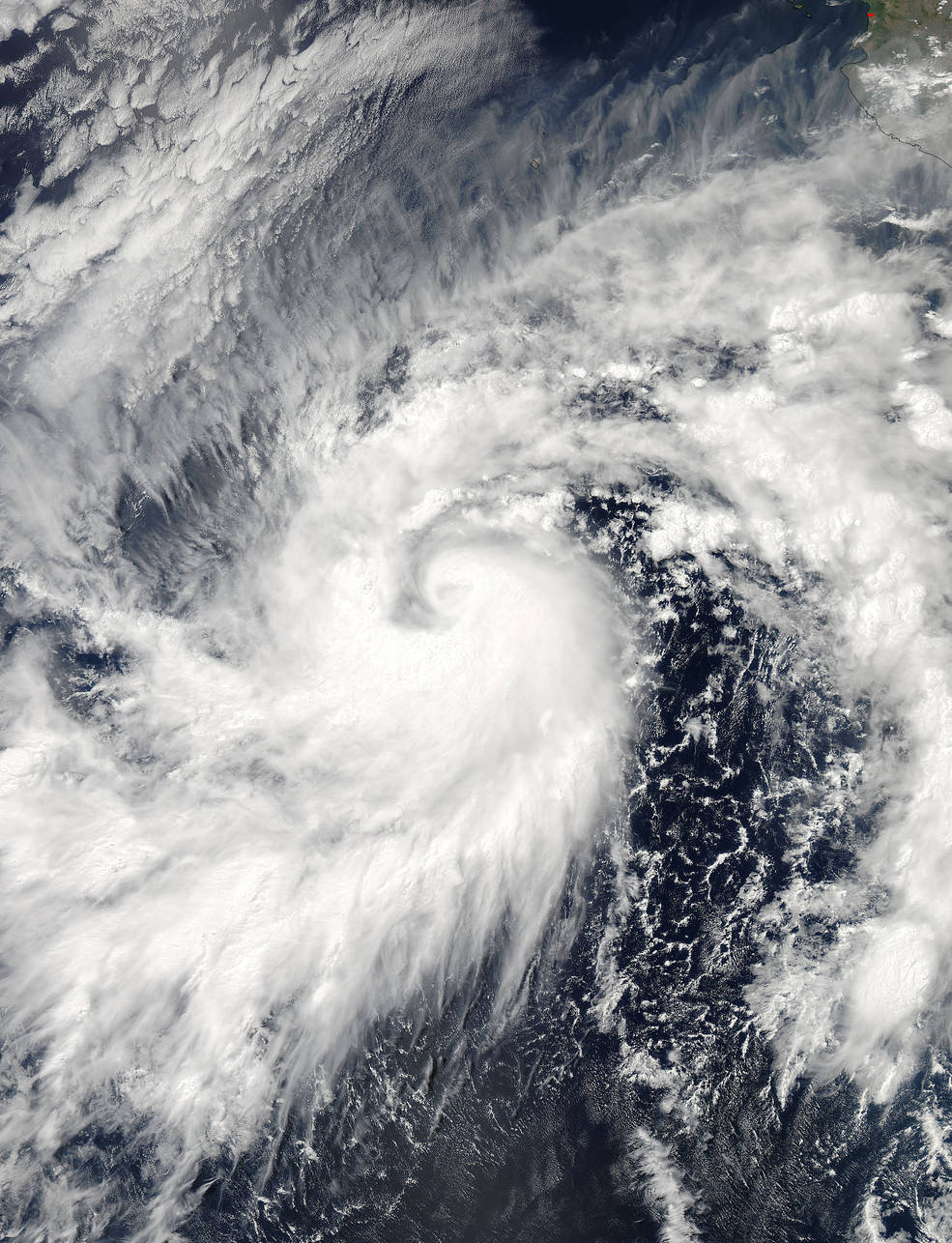 Tropical storm Andres became the first tropical storm of the 2015 Eastern Pacific hurricane season on Thursday, May 28 at 1500 UTC (11 a.m. EDT). The GPM core observatory satellite flew over the intensifying tropical depression, then known as Tropical Depression 01E at 1225 UTC (8:25 a.m. EDT). At NASA’s Goddard Space Flight Center in Greenbelt, Maryland, rainfall data from GPM’s Microwave Imager (GMI) and Dual-Frequency Precipitation Radar (Ku Band) instruments were overlaid on an enhanced GOES-EAST satellite infrared image to create a three-dimensional picture of the storm. The data showed that rainfall was occurring at a rate of over 60 mm (2.4 inches) per hour in powerful convective storms near Andres’ center. GPM radar data showed tall thunderstorms reaching heights of over 15 km (9.3 miles) in a band of thunderstorms.

Eight and a half hours later, the MODIS or Moderate Resolution Imaging Spectroradiometer instrument on NASA’s Aqua satellite captured a visible light image of Tropical Storm Andres. On May 28 at 2100 UTC (5 p.m. EDT), about 6 hours after it intensified into a tropical storm MODIS data showed Andres took on the signature “comma shape” of a tropical storm. The bulk of clouds and showers were south of the center of circulation in a large, thick band of thunderstorms spiraling into the center. The image was created by the MODIS Rapid Response Team at NASA Goddard.

At the same time, the Atmospheric Infrared Sounder or AIRS instrument aboard Aqua captured infrared data. Infrared data indicates temperatures, and the higher the thunderstorms are in the troposphere, the colder the temperature. The colder, higher thunderstorms are more powerful storms with the capability of dropping heavier rainfall. AIRS measured some cloud top temperatures near the center of circulation at -63 Fahrenheit (-53 Celsius), and research has shown that those storms can generate heavy rainfall.

At 9 a.m. EDT (1500 UTC), the center of Tropical Storm Andres was located near latitude 12.5 North and longitude 114.6 West, about 780 miles (1,260 km) south-southwest of the southern tip of Baja California  Andres is moving toward the west-northwest near 9 mph (15 kph).  A northwestward motion at a slightly slower forward speed is expected continue through Saturday night.

Maximum sustained winds remain near 70 mph (110 kph) with higher gusts.  Some strengthening is forecast during the next 48 hours, and Andres is expected to become a hurricane later in the day on Friday, May 29. Tropical storm force winds extend outward up to 115 miles (185 km) from the center. The estimated minimum central pressure is 994 millibars (29.36 inches).

During the past month the National Oceanic and Atmospheric Administration (NOAA) has observed warmer sea surface temperatures in the eastern Pacific Ocean. This indicates that El Nino is becoming stronger. El Nino usually means stronger hurricane activity in the central and eastern Pacific basins so many other tropical cyclones are likely to follow Andres lead in the eastern Pacific.

The National Hurricane Center expects Andres’ winds to peak on May 31 near 100 mph before a weakening trend commences. Andres is expected to remain at sea, and move in a northwesterly direction over the next several days.