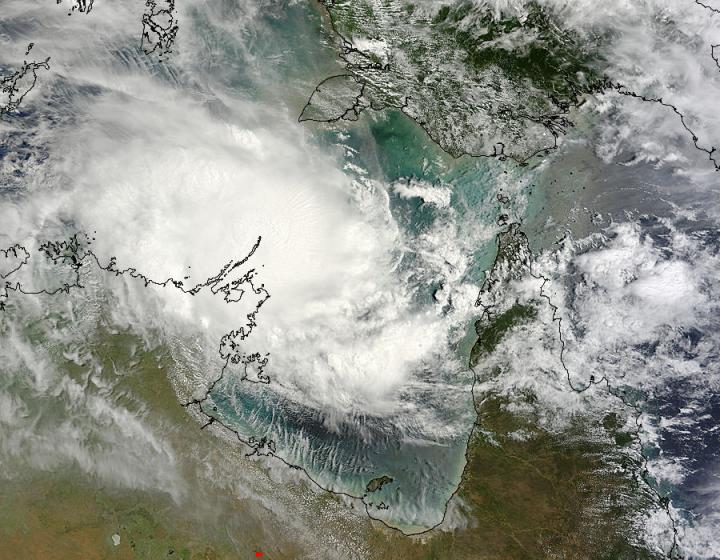 NASA’s Aqua satellite saw powerful, cold, high thunderstorms circling the center of strengthening Tropical Cyclone Lam as it appeared to cover most of the northern half of Australia’s Gulf of Carpentaria.

On Feb. 17 at 04:47 UTC, when NASA’s Aqua satellite passed over Lam, the Atmospheric Infrared Sounder (AIRS) aboard captured infrared data on the storm. The infrared data measured temperatures of the cloud tops in the system. That data was made into an image at NASA’s Jet Propulsion Laboratory in Pasadena, California and false-colored to highlight temperatures.

AIRS identified a large area of strong thunderstorms circling the center of the storm. Those thunderstorms stretched high in the troposphere and AIRS data showed they had cloud top temperatures near -63F/-53C. NASA research indicates that storms with cloud tops that cold and high have the potential for dropping heavy rainfall. The image also showed that Tropical Cyclone Lam extended almost entirely over the northern part of the Gulf of Carpentaria.

The Gulf of Carpentaria is bordered on three sides by northern Australia. It is a large, shallow sea with the Northern Territory to the west and southwest, and Queensland to the east and southeast. To the north of the gulf lies the Arafura Sea.