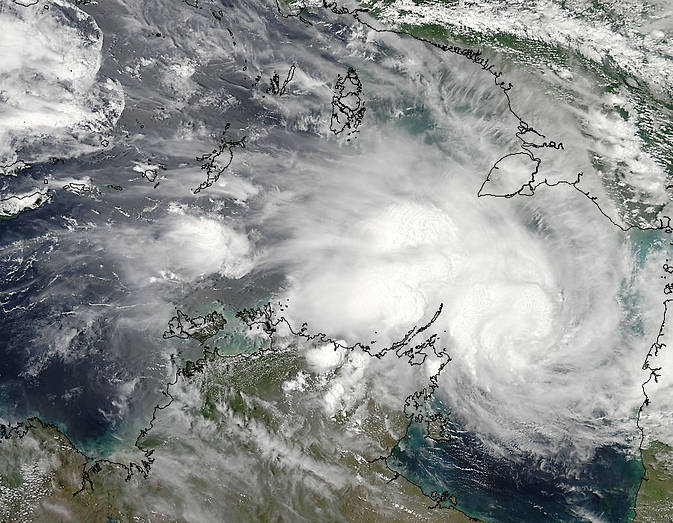 On Feb. 17, a Cyclone Warning was in effect from Maningrida to Cape Shield, including Nhulunbuy. In addition, a Cyclone Watch was in effect from Goulburn Island to Maningrida and Cape Shield to Port Roper, including Groote Eylandt. Strong winds, heavy rainfall, damaging waves and flooding are possible with this storm. For updated warning information from the Australian Bureau of Meteorology, visit: www.bom.gov.au.

The Moderate Resolution Imaging Spectroradiometer of MODIS instrument that flies aboard NASA’s Aqua satellite captured a visible image of Tropical Cyclone Lam in the northern Gulf of Carpentaria on Feb. 17 at 04:50 UTC (Feb. 16, 11:50 p.m. EST). The image showed the center of circulation in the northern gulf, and fragmented bands of thunderstorms northwest of the center in the Arafura Sea. The Arafura Sea is west of the Pacific Ocean and covers the continental shelf between Australia and Indonesia, New Guinea.

The Global Precipitation Measurement (GPM) mission core satellite gathered rainfall rate data when it passed over Lam on Feb. 17 at 12:56 UTC (7:56 a.m. EST). At the U.S. Naval Research Laboratory, the GPM data was overlaid on infrared cloud imagery taken from Europe’s MTSAT satellite to create a full image of clouds and rainfall distribution within the storm. The heaviest rainfall was occurring in areas northwest of the center represent rain falling at over 1.4 inches (35 mm) per hour.

Forecasters at the Joint Typhoon Warning Center (JTWC) expect Lam to intensify and continue tracking to the west over the next day and a half. After that time, forecasters at JTWC expect Lam to turn southwestward and begin weakening. JTWC expects Lam to make landfall into Arnhem Land, and dissipate far inland.

In addition to Tropical Cyclone Lam, west of Queensland’s Cape York Peninsula, another tropical low pressure area is developing east of the peninsula. System 98P was located in the Coral Sea, centered near 14.7 south latitude and 155.3 east longitude, about 1,000 km east northeast of Cairns. It was moving slowly to the south-southeast and has a high chance for development.

The Australian Bureau of Meteorology (ABM) has issued a Severe Weather Warning for damaging winds, heavy rainfall, abnormally high tides and dangerous surf for Queensland’s east coast as the low pressure area may cross the Capricornia or Wide Bay coast on Friday. ABM noted that “Heavy rain and damaging winds are possible from the coast to the ranges between Rockhampton and Brisbane from Thursday, extending down to the state’s southern border during Friday. For more information and progress about System 98P, visit the ABM website: http://www.bom.gov.au.