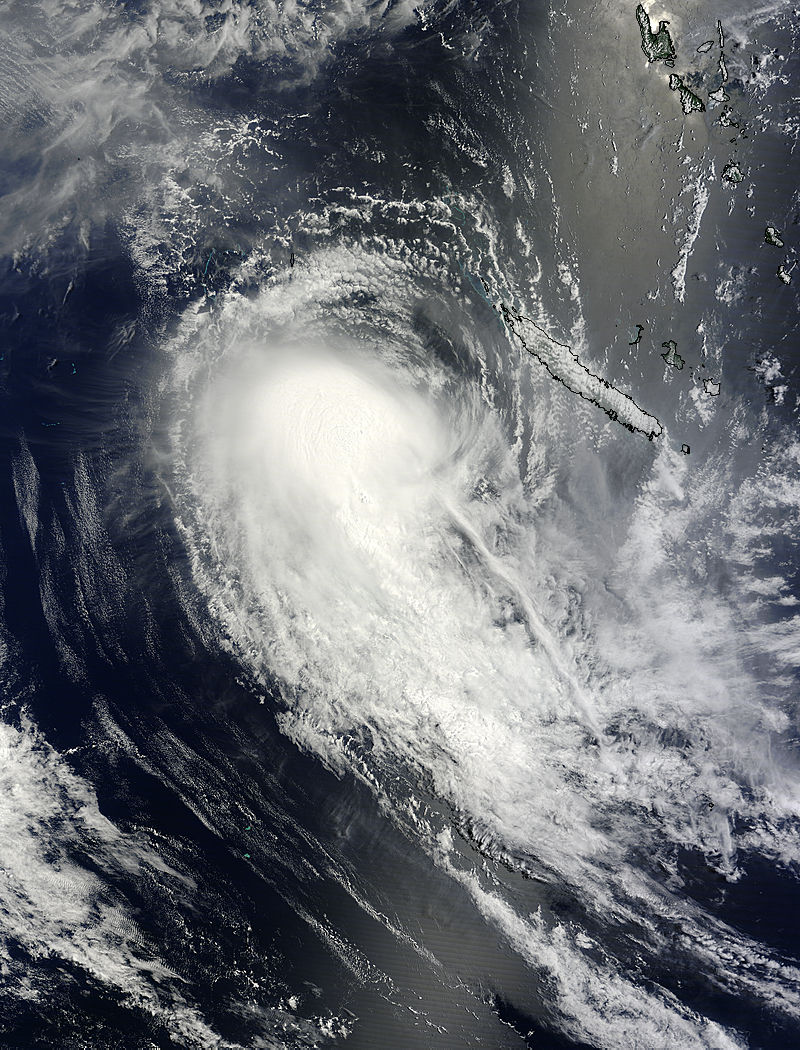 NASA’s Terra satellite captured a picture of Tropical Cyclone Ola on Feb. 1 that showed northeasterly wind shear was pushing the clouds and showers southwest of the center.

On Feb. 1, 2015 at 23:30 UTC (6:30 p.m. EST), the Moderate Resolution Imaging Spectroradiometer or MODIS instrument that flies aboard NASA’s Terra satellite captured a visible image of Tropical Cyclone Ola in the South Pacific Ocean when it was just west of New Caledonia. In the image, Ola appeared somewhat elongated from north to south, as vertical wind shear from the northeast pushed the bulk of clouds to the southwest of the storm’s center, making it appear more stretched out. Powerful thunderstorms with high cloud tops still surrounded the center of circulation, however, and appeared a bright white in the MODIS image.

Tropical Cyclone Ola formed late in the day on January 30, 2015  in the South Pacific Ocean about 300 nautical miles northwest of Noumea, New Caledonia (near 19.1 south and 162.1 east). Within 24 hours of its birth, Ola’s maximum sustained winds increased rapidly from 35 knots (40 mph/62 kph) to 65 knots (75 mph/120 kph) making it a Category 1 hurricane on the Saffir-Simpson Scale.

Ola has been creeping along in the Southern Pacific Ocean, while remaining west of New Caledonia for a couple of days. New Caledonia is an island located 750 miles (1,210 km) east of Queensland, Australia.

On Feb. 2 the center of circulation was parallel to the northern tip of the island. At 0900 UTC (4 a.m. EST), Tropical cyclone Ola was centered near 23.4 south latitude and 161.9 east longitude, about 245 nautical miles (281.9 miles/453.9 km) west-southwest of Noumea, New Caledonia. Ola was moving to the south-southwest at 10 knots (11.5 mph/18.5 kph) and had maximum sustained winds near 65 knots (75 mph/120 kph) making it a Category One hurricane on the Saffir-Simpson hurricane wind scale.  Ola is generating waves up to 18 feet (5.4 meters) high west of northern New Caledonia.

Forecasters at the Joint Typhoon Warning Center noted that the low-level circulation center has become partially exposed due to moderate northeasterly vertical wind shear. Further, that vertical wind shear is forecast to increase as Ola continues in a southerly direction. In addition, the ocean heat content will decrease, so steady weakening is forecast over the next 48 hours when the storm is expected to dissipate.