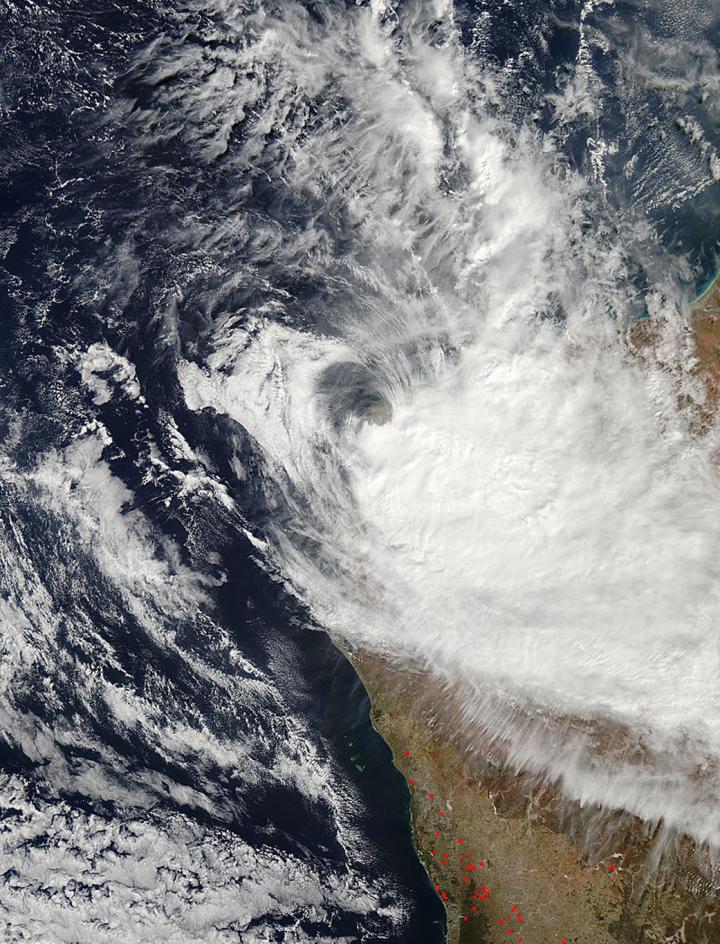 NASA’s Aqua satellite passed over Tropical Cyclone Quang as it was making landfall near Learmonth, Western Australia on May 1.

The Moderate Resolution Imaging Spectroradiometer or MODIS instrument that flies aboard Aqua gathered data on Tropical Cyclone Quang on May 1 at 06:20 UTC (2:20 a.m. EDT). The MODIS image showed that most of the thunderstorms associated with the cyclone were pushed southeast of the center from northwesterly wind shear, and that the other quadrants of the storm had very few thunderstorms. The reason for a lack of thunderstorms and clouds north of the center is that dry air has wrapped around the northern quadrant. Multi-spectral imagery showed that the low level-circulation center had elongated.

On April 30 the International Space Station’s RapidScat instrument measured Quang’s sustained surface winds and observed the storm’s strongest winds were in the southeastern quadrant. RapidScat measured winds from 21:38 UTC to 23:11 UTC (5:38 a.m. to 7:11 p.m. EDT). Strongest winds were seen in the southern quadrant of the storm where a band of thunderstorms was wrapping into the center. Those winds reached speeds of 35 meters per second (78.9 mph/126 kph).

The Joint Typhoon Warning Center (JTWC) noted that the strongest winds were occurring over the southeastern quadrant on May 1 at 0600 UTC (2:00 a.m. EDT) just before the MODIS image was taken. Maximum sustained winds were near 70 knots (80.5 mph/129.6 kph). The center of Quang was located near 21.7 south latitude and 114.0 east longitude, about 36 nautical miles north of Learmonth. It was moving to the southeast at 16 knots (18.4 mph/29.6 kph).

The JTWC forecast calls for Quang to continue weakening as vertical wind shear continues to increase. In addition, as the system tracks over land, the interaction with the topography will also add to the weakening. Quang is not expected to survive more than a day before dissipating.