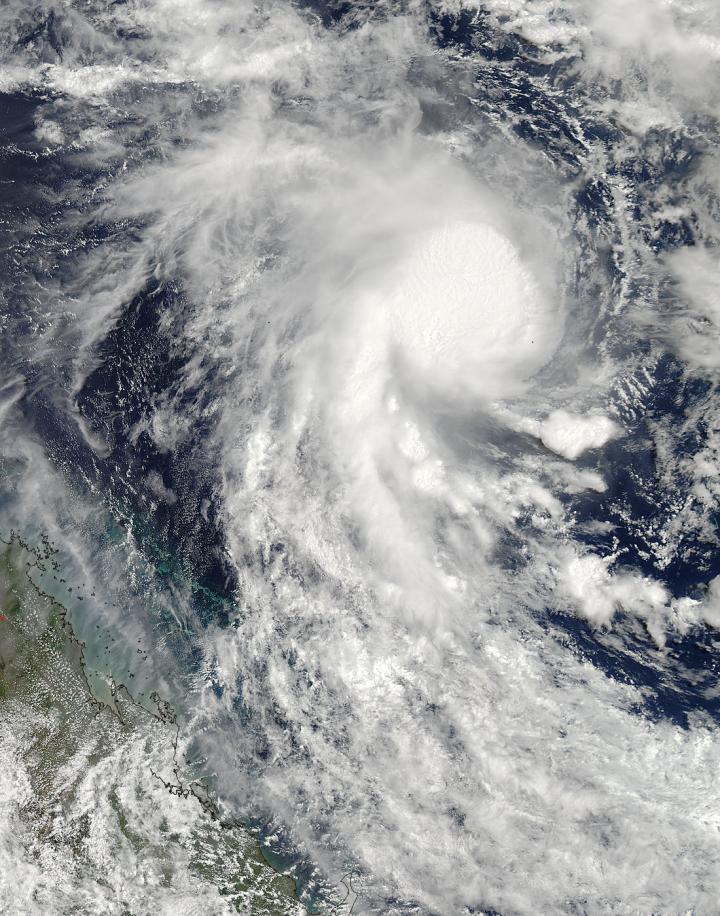 Part of the Queensland, Australia’s eastern coast is now under warnings from Tropical Cyclone Marcia. NASA’s Aqua satellite captured an image of Marcia that showed the storm had consolidated and organized within the last day.

On Feb. 17, Marcia was a tropical low pressure area known as System 98P. Overnight, the storm consolidated and bands of thunderstorms began wrapping into the center of circulation. Early on Feb. 18 at 3:50 UTC, when NASA’s Aqua satellite passed over the system, the Moderate Resolution Imaging Spectroradiometer or MODIS instrument took a visible picture of the storm. The MODIS image showed strong thunderstorms in a tight circle over the low-level center of circulation. A band of thunderstorms southwest of the center was spiraling into the circulation.

The first warning on the tropical cyclone was issued just 50 minutes before NASA’s Aqua satellite passed over the storm. The Joint Typhoon Warning Center (JTWC) posted the warning at 0300 UTC. At that time, Marcia was centered near 16.5 south latitude and 155.9 east longitude, about 335 nautical miles (385 miles/620.4 km) east of Willis Island, Australia. Marcia’s sustained winds were near 35 knots (40 mph/62 kph). It was moving to the south-southwest at 10 knots (11.5 mph/18.5 kph).

Marcia is forecast to move south-southwest, while intensifying to a peak of 45 knots. The JTWC expects Marcia to make landfall in southern Queensland on Feb. 19 and dissipate near Brisbane on Feb. 20.