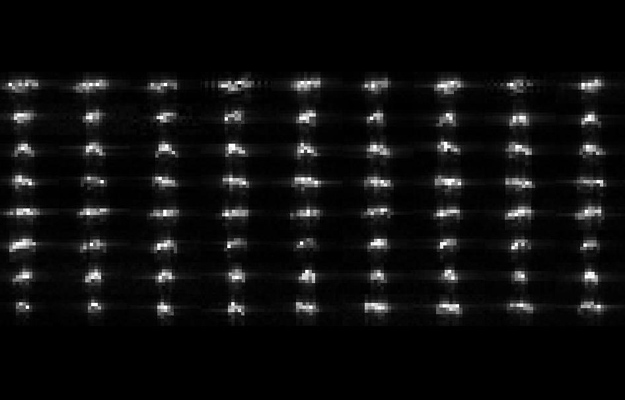 An initial sequence of radar images of asteroid 2012 DA14 was obtained on the night of Feb. 15/16, 2013, by NASA scientists using the 230-foot (70-meter) Deep Space Network antenna at Goldstone, Calif. Each of the 72 frames required 320 seconds of data collection by the Goldstone radar.

The observations were made as the asteroid was moving away from Earth. The asteroid’s distance from the radar dish increased from 74,000 miles (120,000 kilometers) to 195,000 miles (314,000 kilometers). The resolution is 13 feet (four meters) per pixel. The images span close to eight hours and clearly show an elongated object undergoing roughly one full rotation. The images suggest that the asteroid has a long axis of about 130 feet (40 meters). The radar observations were led by scientists Lance Benner and Marina Brozovic of NASA’s Jet Propulsion Laboratory, Pasadena, Calif. Additional Goldstone radar observations are scheduled on February 18, 19 and 20.

Radar is a powerful technique for studying an asteroid’s size, shape, rotation state, surface features and surface roughness, and for improving calculations of its orbit. Radar measurements of asteroid distances and velocities often enable computation of asteroid orbits much further into the future than if radar observations weren’t available.

NASA detects, tracks and characterizes asteroids and comets passing close to Earth using both ground- and space-based telescopes. The Near-Earth Object Observations Program, commonly called “Spaceguard,” discovers these objects, characterizes a subset of them, and plots their orbits to determine if any could be potentially hazardous to our planet.

JPL manages the Near-Earth Object Program Office for NASA’s Science Mission Directorate in Washington. JPL is a division of the California Institute of Technology in Pasadena.