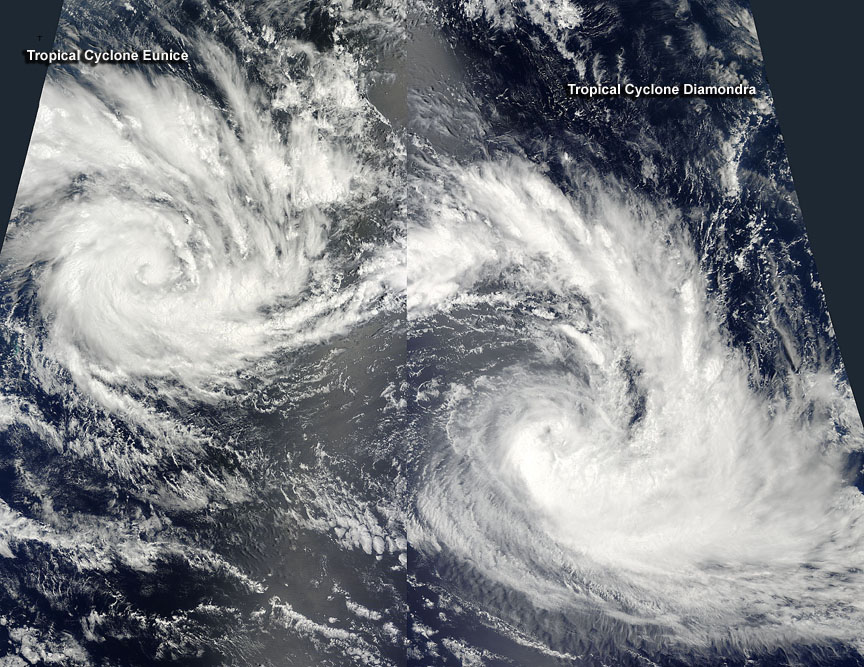 The MODIS instrument that flies aboard two NASA satellites captured images of Tropical Cyclone Diamondra and Tropical Cyclone Eunice in the South Indian Ocean, and two separate images were combined to make one panorama of the two storms.

The Moderate Resolution Imaging Spectroradiometer or MODIS instrument flies aboard NASA’s Aqua and Terra satellites. Those satellites fly in formation behind each other as the circle the Earth. An image from the MODIS instrument aboard each satellite was used to create a panorama from January 28, 2015 at 08:30 UTC (3:30 a.m. EST) showing both storms. Tropical Cyclone Eunice is the more powerful of the two storms and is west of Diamondra.

Tropical cyclone Eunice is the powerhouse of the two storms with maximum sustained winds near 85 knots (97.8 mph/157.4 kph) at hurricane force. JTWC forecasters expect Eunice to continue strengthening over the next couple of days and peak near 125 knots (143.8 mph/231.5 kph) before weakening.

Neither storm threatens any land areas.