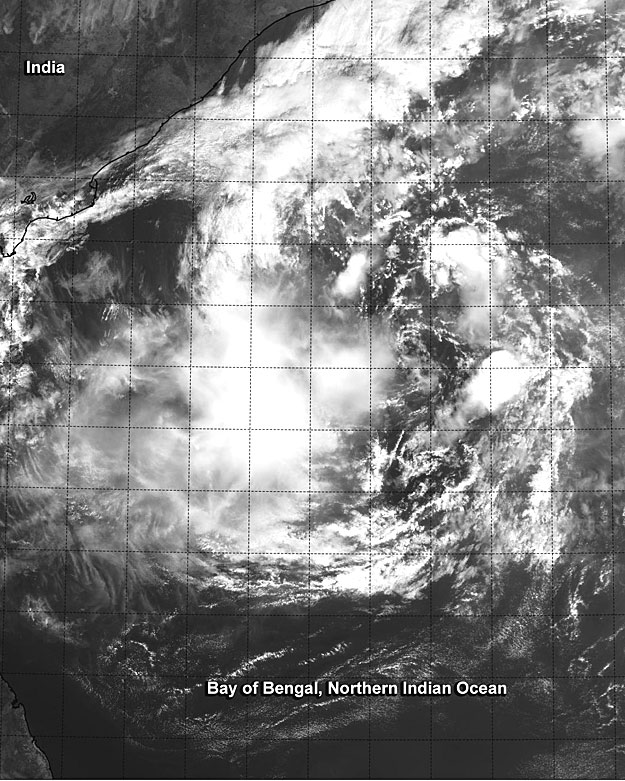 Tropical Cyclone 05B was meandering in the Bay of Bengal on Nov. 8, but forecasters expect it to move west and head toward east-central India for landfall. NASA-NOAA’s Suomi NPP satellite captured a visible image of the tropical storm off India’s coast.

When Suomi NPP flew over Tropical Cyclone 05B (TC05B) on Nov. 7 at 08:09 UTC (3:09 a.m. EST), the Visible Infrared Imaging Radiometer Suite or VIIRS instrument aboard captured a visible image of the storm. The VIIRS image showed a band of thunderstorms wrapping into the center from the northern quadrant, and fragmented bands of thunderstorms around the rest of the storm.

The India Meteorological Department’s Regional Specialised Meteorological Centre (RSMC) forecast noted that light to moderate rainfall would occur at a few places on Nov. 8 and on Nov. 9 would spread over a larger area over Andhra Pradesh and adjoining north coastal Tamil Nadu as TC05B nears.  RSMC calls for sustained winds between 30 and 40 kph with higher gusts along and off the coasts of Andhra Pradesh and north Tamilnadu. Sea conditions are expected to be rough along those coasts both days and fishermen were advised not to venture out to sea. For updated forecasts from RSMC, visit: http://www.rsmcnewdelhi.imd.gov.in.

Tropical Cyclone 05B is forecast to continue moving west and strengthen a little before making landfall between Visakhapatnam and Chennai in eastern India on November 9.