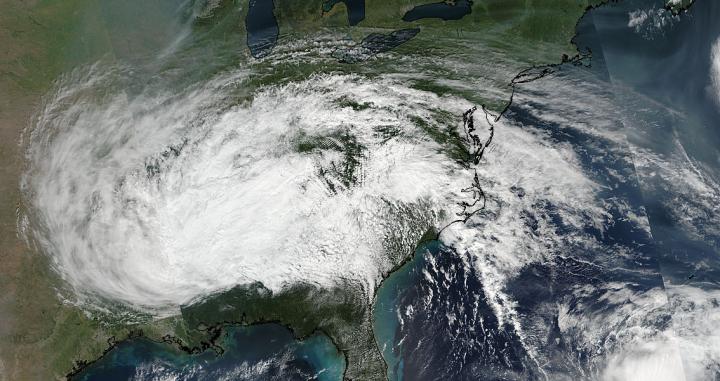 Satellite imagery showed the large extent of the remnant clouds and rains from what was Hurricane Irma. Those remnants were blanketing about a quarter of the continental U.S. over the Ohio and Tennessee Valleys and east to the Mid-Atlantic States.

NOAA’s National Weather Service Weather Prediction Center (WPC) in College Park, Maryland said that “Post-tropical cyclone Irma will continue to weaken and lift northwestward through Wednesday. Moderate to locally heavy rain in the Mid-South and Southeast will lift into the Ohio Valley and Middle Atlantic by Wednesday. Some of the heavier rainfall may produce flash flooding. Isolated thunderstorms will also be possible in the middle Atlantic.”

An animation of NOAA’s GOES East satellite imagery from Sept. 11 at 8:15 a.m. EDT (1215 UTC) to Sept. 13 ending at 8:30 a.m. EDT (1230 UTC) was created by the NASA/NOAA GOES Project at NASA’s Goddard Space Flight Center in Greenbelt, Maryland. NOAA manages the GOES series of satellites and NASA/NOAA GOES Project uses the data to create images and animations. The animation showed Hurricane Jose as it continued making a loop in the Atlantic Ocean between Bermuda and the Bahamas and Post-Tropical Cyclone Irma moved north and weakened to a remnant low pressure area.