We put New Horizons back into hibernation last week, on Aug. 27. This event signaled the completion of our third active spacecraft and payload checkout, which occupied us for most of July and August. Active Checkout Three (“ACO-3”) went very well, its objectives completed with no serious glitches. Our spacecraft and payload are healthy, on course and ready for a set of three hibernation periods that will stretch into late May. Twice during the next nine months we’ll wake the spacecraft up for about 10 days at a time to re-point its antenna toward Earth and conduct a few minor maintenance activities.

The first of these two wakeups will occur Nov. 9-18. Until then, New Horizons will report in with status beacon checks every Monday and telemetry sessions every other Thursday that update us on key spacecraft engineering parameters. Meanwhile, our science and flight teams are reviewing ACO-3 data, scoping the list of activities for next summer’s ACO-4 (already!) and finalizing our Pluto near-encounter activities sequence. The science team is also planning a selection process for teams to search for our target Kuiper Belt Objects (KBOs); proposals will be due early next year, with searches to take place in 2011 and 2012. And we’ve also been planning a science workshop at the Space Telescope Science Institute in Baltimore next May. 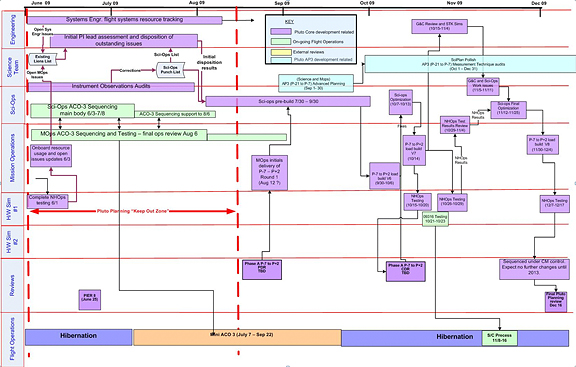 To get a feel for why we say “Science Never Sleeps,” take a look at our Pluto encounter planning schedule for this fall. As you can see, our small team uses the spacecraft hibernation periods to get this kind of planning and testing done in preparation for Pluto encounter. Unlike our baby out there in deep space, we’re not hibernating at all on the ground. Click to enlarge.

New Horizons is now almost 14.4 astronomical units from the Sun, and will cross the halfway point between the orbits of Saturn and Uranus next week. We?re now firmly in the “Centaur region” where escaped KBOs roam between the giant planets. (In fact, we regularly check to see if there is a chance encounter coming with any Centaurs, but so far, no known Centaur is passing closer than about half a billion kilometers from New Horizons.) 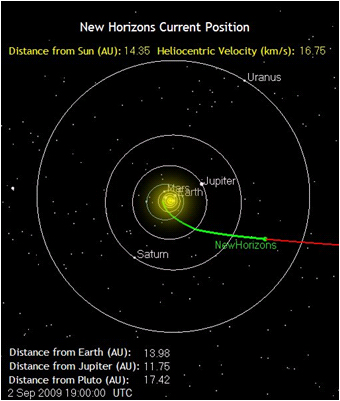 New Horizons will reach the halfway point between Saturn and Uranus on Tuesday, Sept. 8. That officially puts us in “Uranus space.”

That’s my update for now; thanks for following our journey to a new frontier. I’ll be back in touch in November, around the next time we wake up our spacecraft. In the meantime, keep on exploring, just as we do!