By SpaceRef Editor
July 26, 2006
Filed under exploration, NEEMO, US

NEEMO 10 mission day 3 opened with the crew exercising some scenarios representative of the things we may do when we return to the moon. We envision that one of the first tasks for a crew returning to the Moon to live will be to survey and map the immediate area around their new home. While satellite maps of the landing site will certainly be available, the detailed maps they develop in situ can then be used by scientists and Mission Control Center personnel to plan the Extra Vehicular Activities for the crew as they work. Similarly, we started this mission with general bathymetric maps of the ocean floor near Aquarius. Today our crew used a navigational device (called a “Cobra Tac”) to record the coordinates of landmarks of interest within a 400 foot radius of Aquarius. This, along with detailed bathymetrical data we’ve previously obtained of the ocean floor will allow us to generate a much more detailed map. The detailed map is required to plan our ROV (rover robot) activities later in the mission, among other things. 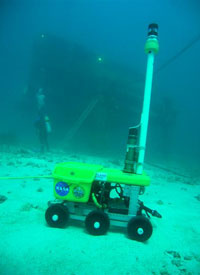 The aquanaut tracking system is a centerpiece of our exploration analog activities. When we go back to the Moon to stay, our astronauts will sometimes be going on lengthy excursions away from their base. Obviously for their own safety, as well as for situational awareness for the Mission Control team in Houston, it will be beneficial to know where they are. Think of an air traffic controller seeing a screen showing each airplane in the area – its distance away, its bearing (direction from the tower), and a little track of dots (called “breadcrumbs”) showing where it has been. This is how our aquanaut tracking system works. It has a transceiver mounted above Aquarius which sends ultrasonic signals out across the reef. The aquanauts and/or ROV are outfitted with a transponder.

When the transponder gets interrogated by the incoming signal from the transceiver, it replies with identifying information. Thus our mission controllers in the ExPOC and crewmembers inside the habitat know where each aquanaut and the ROV are with respect to the habitat, as well as where they’ve been.