By SpaceRef Editor
November 20, 2012
Filed under Earth, MODIS Image of the Day, NASA MODIS Web, US 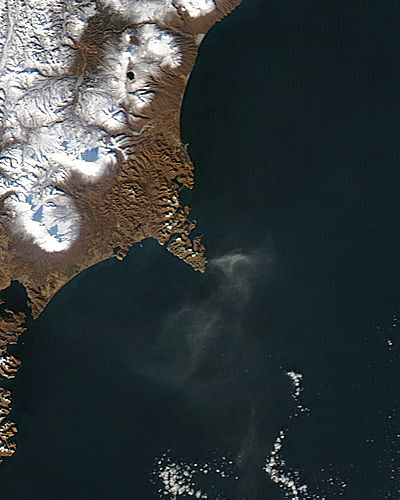 In early November, 2012, the Karymsky volcano on Russia’s Kamchatka Peninsula continued its restless eruption, with seismic activity and emissions of ash plumes. The Moderate Resolution Imaging Spectrometer (MODIS) aboard NASA’s Aqua satellite captured this true-color image on November 13, 2012. Although it did not capture the volcano in mid-eruption, clues of recent activity are written on the landscape. Karymsky volcano is a beautifully symmetrical stratovolcano, situated very close to and due north of a strikingly round lake, Lake Karymsky. In this image, the volcanic peak appears bright white, but is rather indistinct. On three sides the volcano is covered with white snow, but to the southeast a triangle of gray expands towards the lake. This gray may be partially created by shadows from the low southern sunlight, but it is likely also created by snow discolored by dark ash from activity at Karymsky. The Tokyo Volcanic Ash Advisory Center (VAAC) reported that on November 10 a possible eruption produced a plume that rose to an altitude of 5.5 km (18,000 feet) and drifted to the east of Karymsky. In this image, the remnants of a volcanic plume can be seen drifting southward over the North Pacific Ocean.