NASA MODIS Image of the Day: May 27, 2012 – Phytoplankton bloom in the North Sea

By SpaceRef Editor
May 27, 2012
Filed under Earth, MODIS Image of the Day, NASA MODIS Web, US 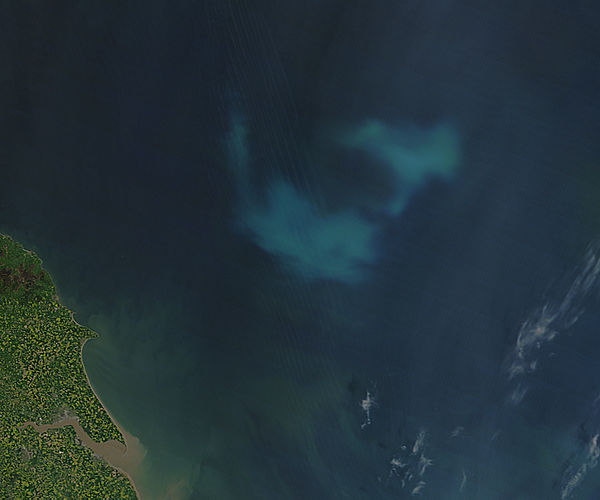 Bright blue patches decorated the North Sea in late May 2012, evidence of a phytoplankton bloom in the waters east of the United Kingdom. The Moderate Resolution Imaging Spectroradiometer (MODIS) aboard NASA’s Terra satellite captured this true-color image on May 22, 2012 as it passed over the region. Phytoplankton, which are tiny organisms that form the base of the marine food chain, grow robustly in parts of the North Sea in the spring and summertime. Different sections of the Sea tend to produce their richest blooms at slightly different times. The area east of the Humber River tends to have peak chlorophyll concentration, as well as highest primary production of phytoplankton, in May to June. In this image, the River Humber can be seen in the southwest corner. It is filled with tan sediment, which spills into the North Sea. As the sediment spreads into the Sea and sinks, the blue waters are painted in swirls of brown and greens. The influx of sediment from the river carries nutrients into the Sea and this influx likely encourages the lush growth of the bloom.