By SpaceRef Editor
May 20, 2012
Filed under Earth, MODIS Image of the Day, NASA MODIS Web, US 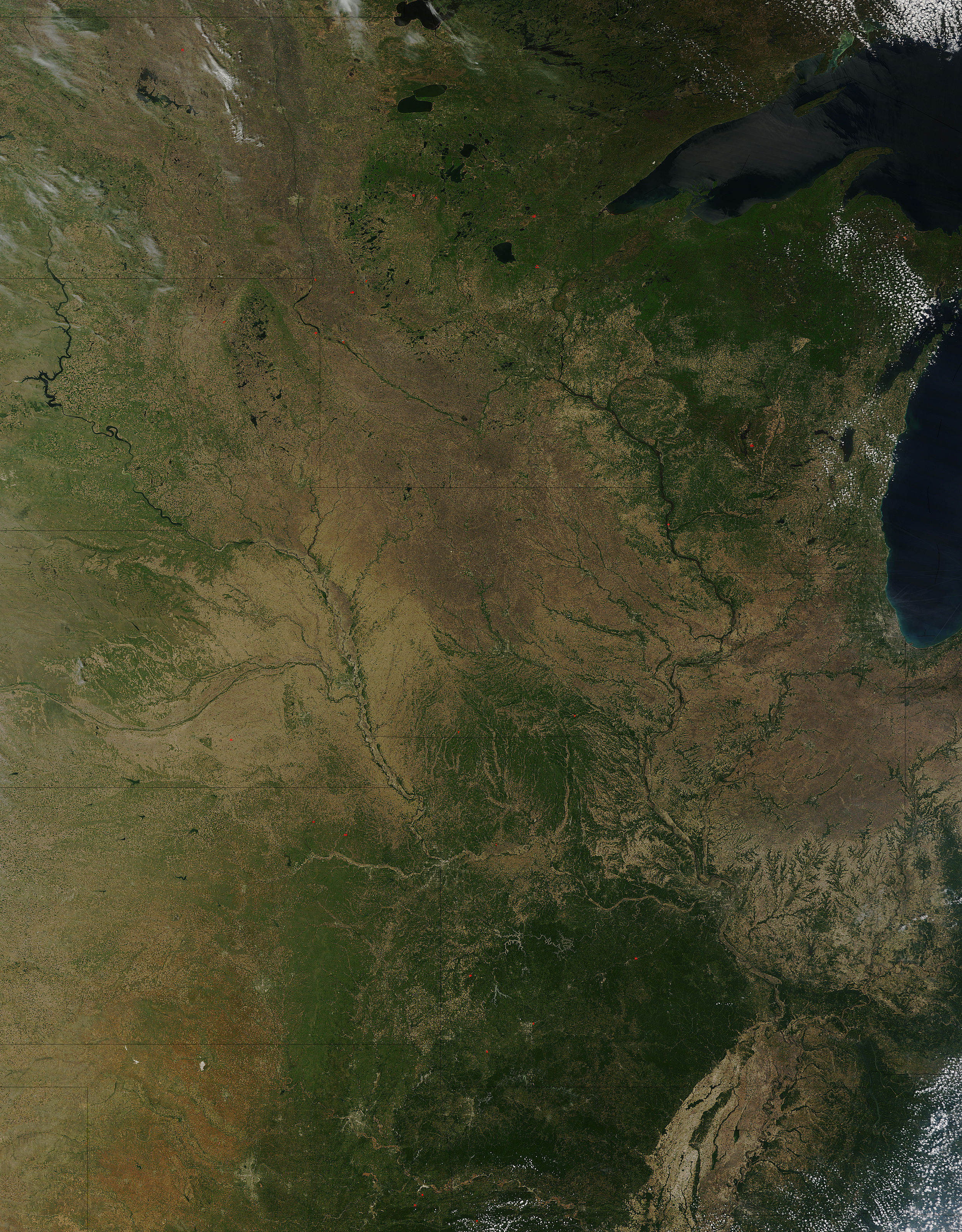 Although the skies over the Upper Midwest, United States were nearly cloud-free on a sunny mid-May afternoon, the region was sheeted by thin veil of upper level smoke from fires burning as far away as Siberia. The Moderate Resolution Imaging Spectroradiometer (MODIS) aboard the Terra satellite captured this slightly hazy true-color image on May 16, 2012 at 17:50 UTC (12:50 p.m. Central Daylight Time). At the far northern edge of this image lies Canada. Below the border eleven states have been outlined. From north to south, starting at the left edge of the image the states are: North Dakota, Minnesota, Wisconsin, Michigan; South Dakota; Nebraska, Iowa, Illinois, Ohio; and northern Kansas and Missouri. Lake Superior lies near the upper right corner and Lake Superior to the southeast. The Mississippi River forms the border between several states as it courses from Lake Itasca in Minnesota to the Gulf of Mexico, far south of this image. To the west the Missouri River courses through the Dakotas and across Missouri until it joins the Mississippi in St. Louis, Missouri. The entire region is swathed in an fine smoke, as evidenced by the hazy appearance to the image, which seems thickest over the Mississippi River Valley. According to the U.S. Air Quality Smog Blog, created by the University of Maryland, Baltimore County, smoke that showed up over the central United States on May 14 was tracked back to wildfires along the Russian/China border near Manchuria. The plume of Siberian smoke was lofted to high altitudes by a serious of pyrocumulonibus clouds, which are cumulus clouds that form over powerful heat sources, such as large wildfires. Once aloft, smoke can be carried extensive distances. As of May 18, the air quality index (AQI) in much of the Upper Midwest was reported to be Code Yellow (Moderate) and reached Code Orange (Unhealthy for Sensitive Groups) along part of the Mississippi River Valley. A relatively quiet weather pattern, with weak winds in the mid and upper troposphere are limiting the advancement of the smoke layer. The Navy Aerosol Analysis and Prediction System (NAAPS) are forecasting the smoke to remain nearly stationary through at least May 20.