By SpaceRef Editor
May 19, 2012
Filed under Earth, MODIS Image of the Day, NASA MODIS Web, US 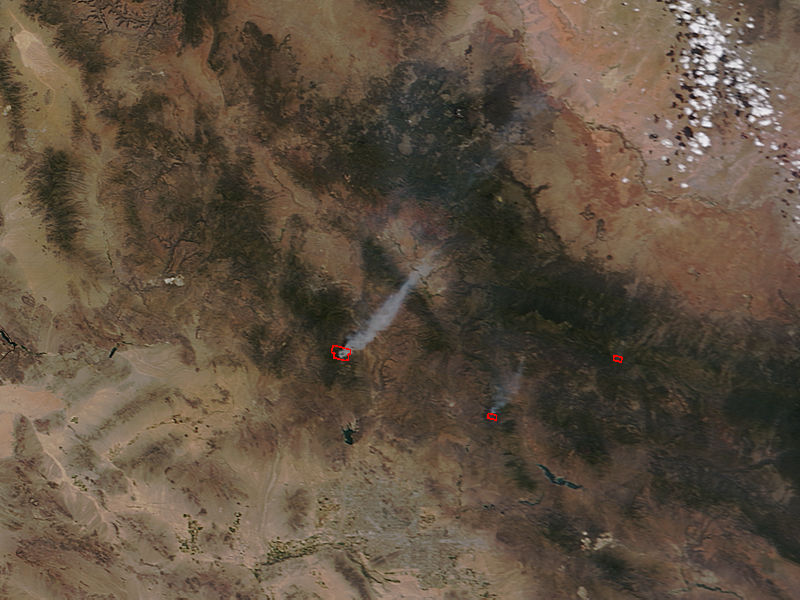 Persistent heat, very low humidity and high winds fanned the flames of several wildfires burning in Arizona in mid-May, 2012. The Moderate Resolution Imaging Spectroradiometer (MODIS) aboard NASA’s Terra satellite captured this true-color image as it passed over three active fires on May 16 at 16:55 UTC (9:55 a.m. local time). The fire with a large gray plume of smoke trailing to the northeast near the center of the image is the Gladiator Fire. It began on May 13 near the community of Crown King as a structure fire on private property. It is now burning in the Prescott National Forest. As of May 18, it had consumed 9,900 acres of land and Inciweb estimated the blaze was only 5% contained. To the southeast, the Sunflower Fire burns in steep and rugged terrain about 20 miles south of Payson. This fire ignited on May 12 and has burned 14,465 acres of grass, chaparral and pinyon pine. The cause of the blaze is under investigation. The eastern-most fire is the Bull Flat Fire, which began on May 10 most likely as a result of lightning strike. It is burning in a remote area north of the Fort Apache Agency, in a fire scar left by another blaze 10 years earlier. It is reported to have consumed about 2,100 acres, and is considered to be 50% contained. The wind, heat and low humidity combine to create extreme fire hazards, and much of the area has been under a red-flag warning. According to Accuweather, winds of up to 25 mph with local gusts of 40-50 mph threatened to spread flames and burning embers on May 18, as a storm system moved across the central Rockies. These winds are expected to ease slightly over the next few days as the storm system enters the Plains.