By SpaceRef Editor
March 27, 2013
Filed under Earth, MODIS Image of the Day, NASA MODIS Web, US 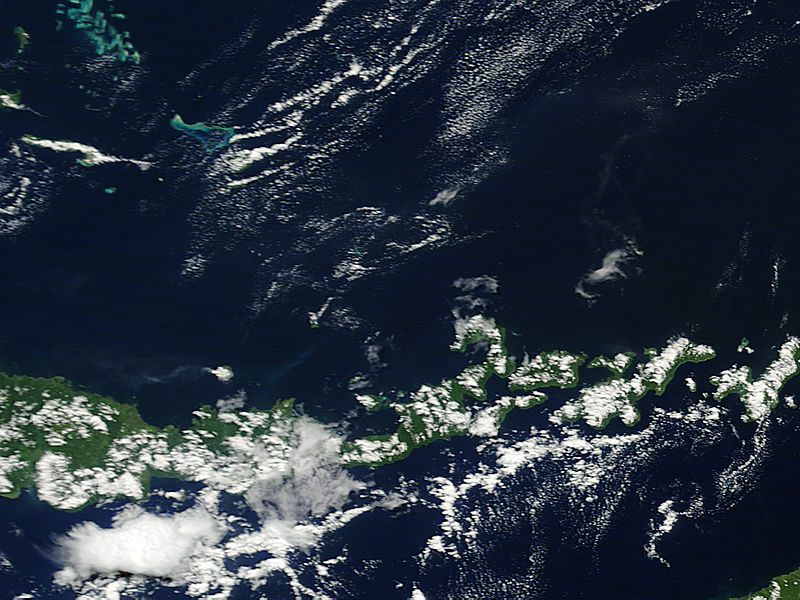 Eruptions continued at two of Indonesia’s volcanoes in mid-March, 2013. On March 17, 2013 the Moderate Resolution Imaging Spectroradiometer (MODIS) aboard NASA’s Terra satellite captured this true-color image of ash plumes rising from both Paluweh and Batu Tara volcanoes. Paluweh, also known as Rokatenda, is a large stratovolcano located just north of Flores Island. Rising 3,000 meters from the sea floor, the volcanic tip forms a small island. In 1928 it erupted explosively, producing a landslide that triggered a tsunami. Since that time, the intermittent eruptive cycles have been more moderate. Volcano Discovery reports that on February 3, 2013, the volcano experienced a smaller, but significant explosive eruption with a partial dome collapse. Pyroclastic flows were observed, as well as ash plumes rising to 13,000-16,000 feet (4-6 km), and activity continued throughout February and March. On March 17, a new explosion produced an ash plume visible from Flores’ north coast, and which rose about 12,000 ft (3.7 km). North and east of Paluweh lies Batu Tara, a small island volcano located north of Lembata Island in the Flores Sea. It is frequently active, primarily emitting ash and steam. On March 18, Volcano Discovery reported that an ash plume had been spotted rising to 8,000 feet (2.4 km) from Batu Tara.