By SpaceRef Editor
March 22, 2013
Filed under Earth, MODIS Image of the Day, NASA MODIS Web, US 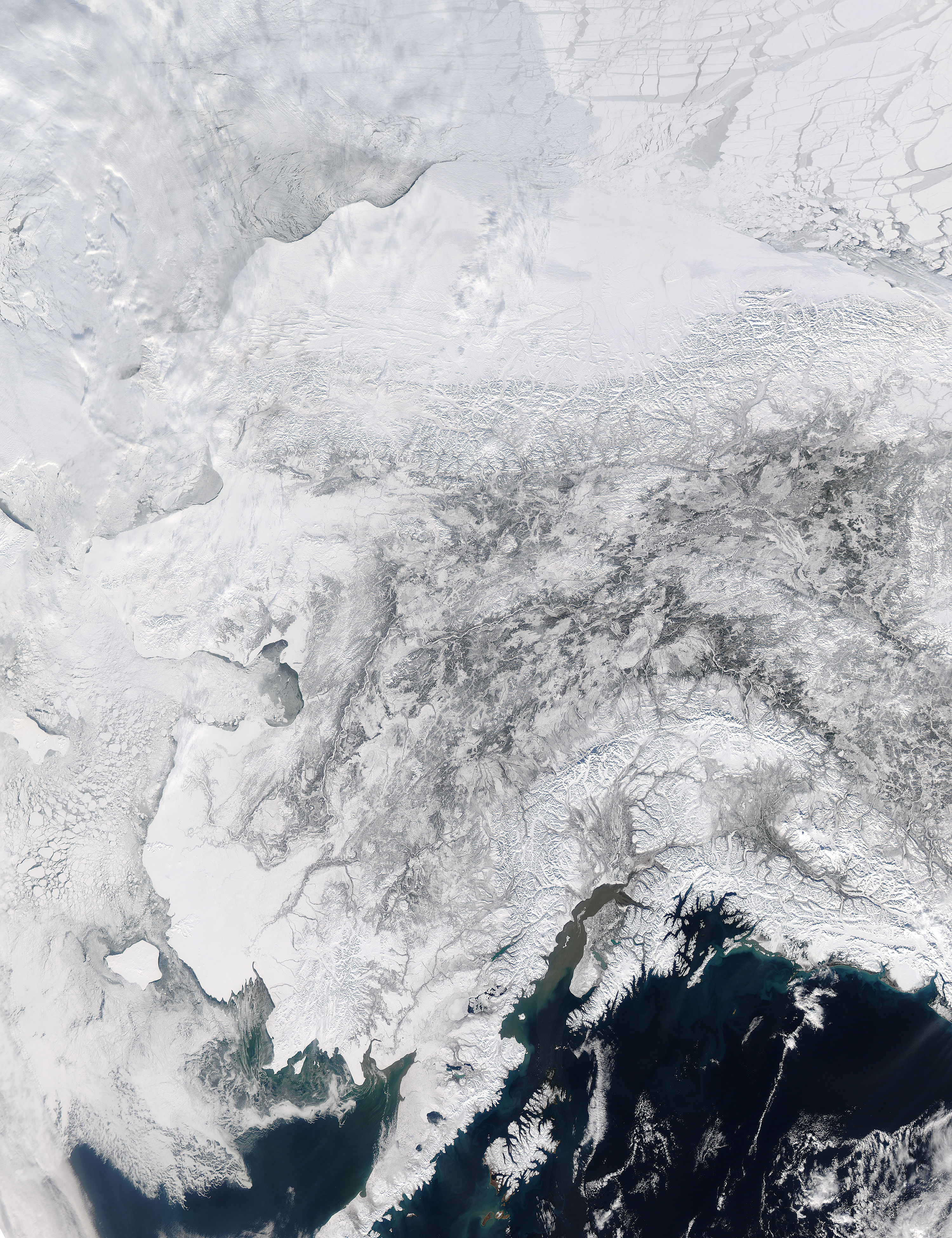 On March 12, 2013, a drama was unfolding in Alaska as fifty four teams of dogs raced for the finish line of the world’s most famous long-distance dog sled race – the Iditarod. The first team of ten dogs passed the finish line in Nome about 10:30 p.m. local time, after a grueling 998 mile run from Anchorage which began on March 2. The winning team finished in 9 days, 7 hours and 29 minutes, with an average speed of 4.41 miles per hour. The last musher guided her team into Nome after noon on March 17, after 13 days, 22 hours and 26 minutes in the extreme environment. The Iditarod Trail is built on traditional trade routes which date, in part, back many hundreds of years and began as trade routes and roadways for Native Alaskan Eskimo peoples. As fur traders arrived in the 1800’s, and later as the area was settled by miners and gold-rushers, this route became a major thoroughfare. Impassable in the spring, summer or fall, the trail was a winter time life-line from inland areas, where goods could be brought in from Nome, located on the Bering Sea, and Anchorage, located on the Cook Inlet near the Chugach Mountains. The Moderate Resolution Imaging Spectroradiometer (MODIS) flying aboard NASA’s Aqua satellite captured this true-color image of Alaska on March 12 at 2250 UTC (2:50 p.m. local time), less than 8 hours before the first dogs arrived in Nome. Although not visible in this image, even at high resolution, the race was in full swing. In this image, the Cook Inlet can be seen in the lower center, colored with gray silt. The valley of the Chugach Mountains, near the location of Anchorage, is dimmed by afternoon shadows. Northwest of Anchorage the outline of Norton Sound, which bears a resemblance to the head of a cat, can be seen. Nome is situated on the northern shore of this Sound, in the area where sea ice remains close. At this time of year, the sun lies low in the sky. Located nearly due south of this image, the rays reflect brightly off the snow at the more southerly latitudes, but the low angle creates shadows in the valleys. The far northern section of this image lies within the Arctic Circle. In that region, the late afternoon sun is so low that the land appears in the muted colors of twilight. A map of the 2013 Iditarod can be seen at http://iditarod.com/race-map/