By SpaceRef Editor
March 12, 2013
Filed under Earth, MODIS Image of the Day, NASA MODIS Web, US 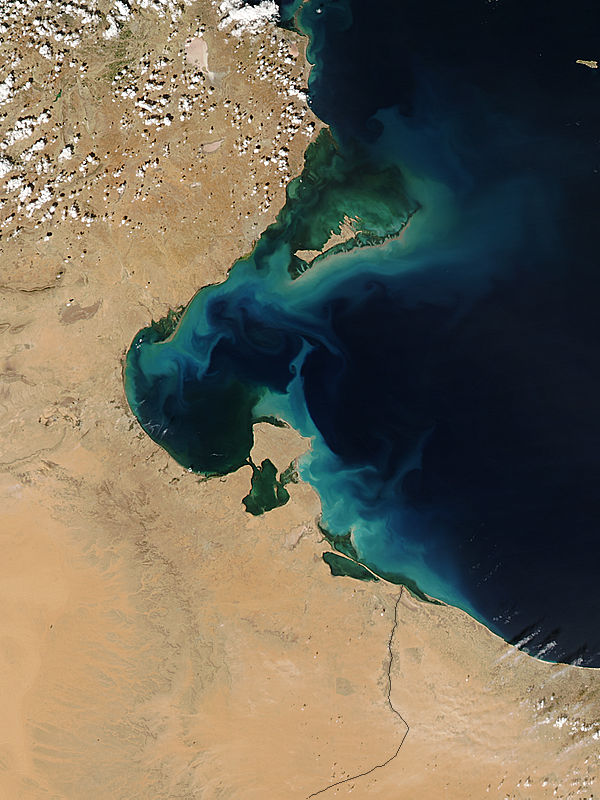 On March 7, 2013 the Moderate Resolution Imaging Spectroradiometer (MODIS) aboard NASA’s Aqua satellite captured a striking image of sediment and phytoplankton swirling around the islands of Tunisia. In the Gulf of Gabes, the Kerkennah Islands (north) are surrounded primarily in green, while the water east of large Djerba Island (south) appears a milky tan. The variations in color may be attributed to a complex set of conditions in the Gulf, including the depth of sediment which has been blown or washed into the waters. When sediment is near the surface, it appears a tan color. As it sinks, the reflectance characteristics change, and the visible color also changes. Phytoplankton, too, varies in color for many reasons, including the depth of the bloom in the water as well as the species of phytoplankton. The Gulf of Gabes is a very shallow body of water off the coast of Tunisia, and it floats over the continental shelf of the African Plate. The maximum depth of the water is less than 200 meters, and the tides are large, with difference between low and high tide as great at 2.1 meters. The motion of the tide along the sandy beaches brings sediment into the waters. Dust storms which blow from the dry interior across the Gulf are common, and are another source of sediment. The shallow shelf and the broad motion of the tides create expansive beaches. Combined with the warm, dry climate, the islands in the Gulf of Gabes have proven to be popular tourist destinations. Djerba, whose economy is strongly linked to tourism, has been called both “The Island of Dreams” and “The Island of Forgetfulness”.