By SpaceRef Editor
June 9, 2012
Filed under Earth, MODIS Image of the Day, NASA MODIS Web, US 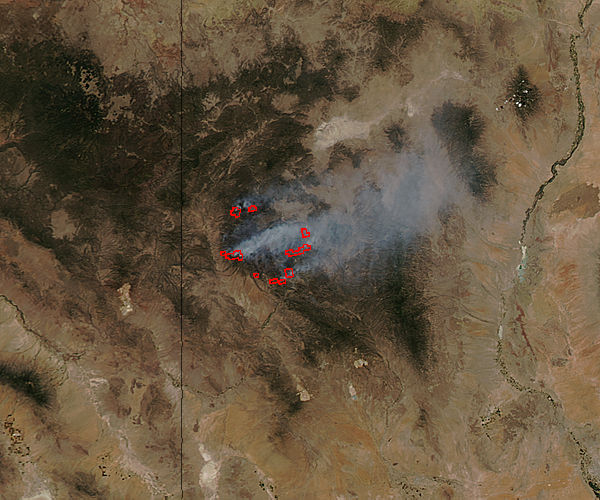 The Whitewater-Baldy Fire Complex continued to scorch southwestern New Mexico, consuming over 18,000 acres in just one day. This true-color image was acquired by the Moderate Resolution Imaging Spectroradiometer (MODIS) aboard NASA’s Aqua satellite on June 5, 2012, when the fire had burned 259,025 acres and was 20% contained. According to Inciweb, on June 4 the total acreage burned was 241,701 acres. On the date this image was captured, over 1,102 firefighters were at work on the blaze, including 13 hotshot crews and 8 hand crews. The equipment included 60 engines, 28 water tenders, 7 bulldozers, and 10 helicopters. One technique being used was aerial ignition of controlled fires along multiple portions of the fire boundary, designed to stop the spread of the wildfire to rob it of fuel. It is likely these controlled fires that can be seen on the image, as they are thermally hot and located on the edge of the charred border. This fire began on two separate incidents, both as a result of lightning strike. The Baldy fire began on May 9 and about 10 miles to the northwest, the Whitewater fire started on May 16. The fires merged on May 23, a day of high winds and fast fire spread. By June 8, Inciweb reports a total of 270,722 acres have burned since the start of the fires. Although the Whitewater-Baldy Complex Fire is only 30% contained, fire suppression is considered to be generally successful. Personnel numbers are being reduced, with 887 firefighters remaining on the scene.