By SpaceRef Editor
June 24, 2012
Filed under Earth, MODIS Image of the Day, NASA MODIS Web, US 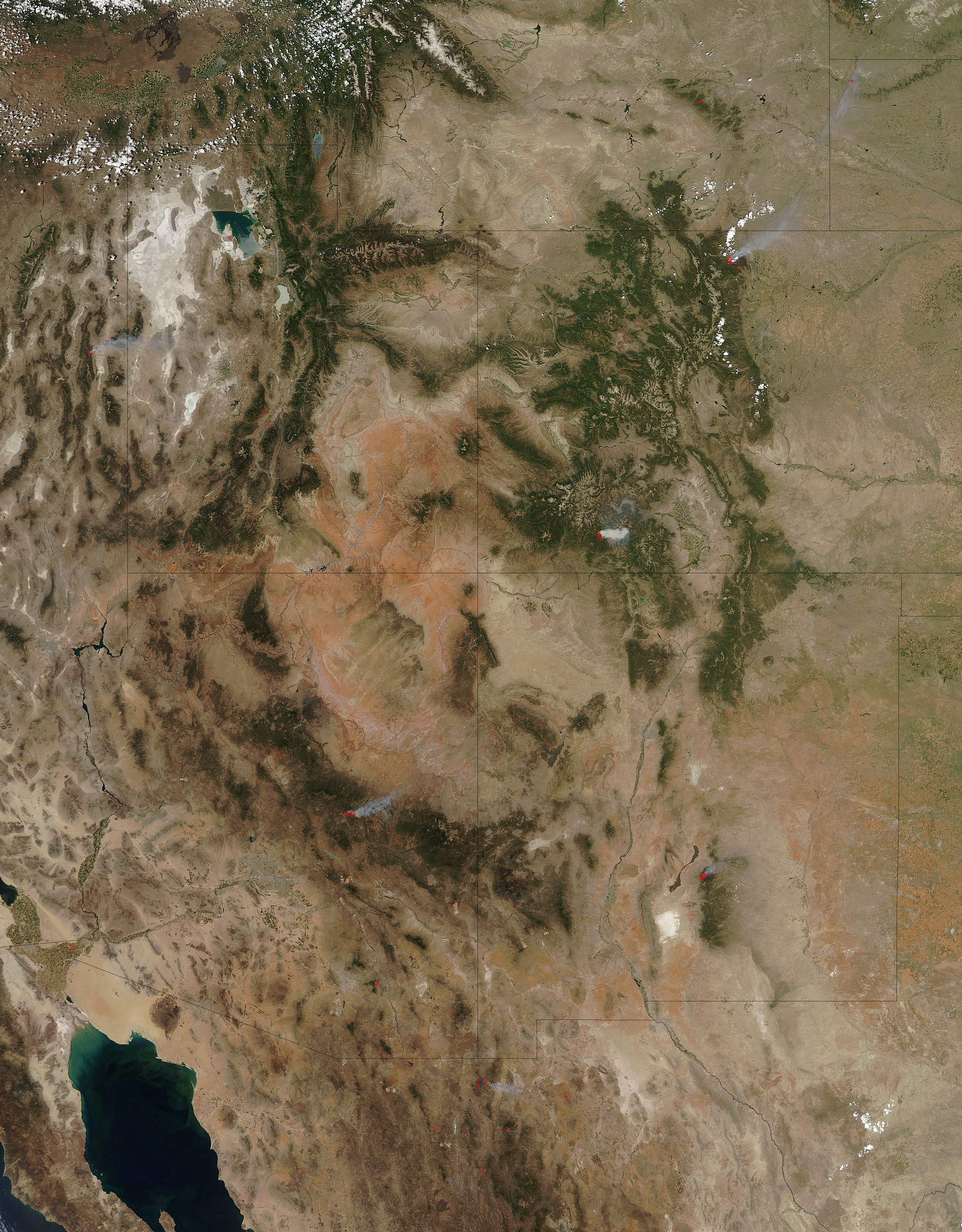 Several fires burned across the parched lands of the western United States in mid-June, 2012. The Moderate Resolution Imaging Spectroradiometer (MODIS) aboard NASA’s Aqua satellite acquired this true-color image of smoke (light brown) and hot spots (marked in red) from active fires in Colorado, Nevada, Arizona, New Mexico and Wyoming on June 19, 2012 at 20:25 UTC (4:25 EDT). Major fires captured in this image include Colorado’s High Park Fire (north) and Little Sand Fire (south); Nevada’s North Schell Fire; Arizona’s Little Poco Fire; New Mexico’s Whitewater-Baldy Complex and Little Bear fires and Wyoming’s Russells Camp Fire. As of June 23, Colorado’s High Park Fire, which started on June 9 from a lightning strike, had become the second largest fire in the state’s history, consuming 75,537 acres of forest and grassland. It was estimated to be 45% contained, although the fire was exhibiting extreme behavior and aggressive surface spread. A spot fire which erupted north of Poudre Canyon had consumed another 2,000 acres. Already the most destructive fire in Colorado history, at least 5-10 more homes had burned on June 23, bringing the total homes destroyed to at least 191. The Little Sand Fire, which pours a thick plume of smoke in this image, has burned 18,439 acres as of June 23, and according to Inciweb, is 34% contained. It also ignited from a lightning strike. The North Schell Fire, in Nevada, which began as a prescribed burn on July 9, has destroyed 11,987 acres and is 75% contained. The smokiest and largest fire seen in Arizona is the Poco Fire. It was started by human activity, and has burned 11,950 acres in the Tonto National Forest. In New Mexico, the Whitewater-Baldy Complex Fire has burned 297,845 acres after igniting from two separate lightning strikes on the morning of May 16. Although fire still actively burns in the interior, Inciweb reports the blaze is 87% contained, with low probability of spread. Some of the affected acreage has been placed in Burned Area Emergency Response status in order to prevent debris flows, floods and soil erosion. Further south, a June 4 lightning strike sparked the Little Bear Fire, which consumed 44,330 acres of conifer forest and 254 structures. As of June 23, it is 90% contained. In Wyoming, the Russells Camp fire has burned 3,060 acres in the Medicine Bow National Forest, state and park lands, and threatens homes and cabins on Cold Springs Road. Only 10% contained, this blaze ignited on June 17. A fire investigator is on the scene, but the cause is so far undetermined.