By SpaceRef Editor
June 17, 2012
Filed under Earth, MODIS Image of the Day, NASA MODIS Web, US 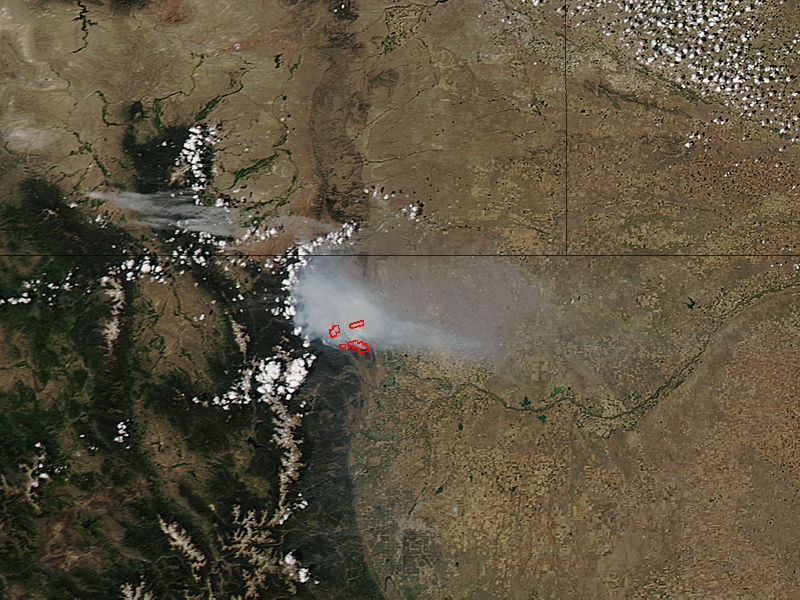 On June 9, 2012, lightning struck dry forest in Larimer County, Colorado, igniting an aggressive fire that within a week had become the single-most destructive fire to homes in Colorado history. By June 16, 181 homes had been consumed by the flames, surpassing the 169 homes destroyed by the Four Mile Fire in 2010. According to Inciweb, on June 16 the fire had burned 54,232 acres of timber, grass and brush in the Arapaho and Roosevelt National Forests and the Pawnee Grasslands. Although 1,533 personnel were fighting the fire around the clock, the blaze was only 20% contained. Steep terrain, limited access, and the presence of dense stands of beetle killed trees to the west of the fire, along with extremely dry and windy conditions caused the potential for growth to be labeled as “extreme”. Evacuation of over 600 homes continued, and multiple roads were closed in the area due to smoke and risk of fire activity. The Moderate Resolution Imaging Spectroradiometer (MODIS) aboard the Aqua satellite captured this true-color image on June 11 at 19:35 UTC (1:35 p.m. Mountain Daylight Time). At that time, the very aggressive fire was only two days old, and had already burned over 40,000 acres. Firefighters had reported flames as high as 300 feet and moving as fast as 20-40 feet per minute. Smoke from the fire can be seen blowing to the east and billowing northward. Fort Collins, home to about 150,000 people, is complete obscured from view by the smoke. A haze hangs over the foothills of the Rocky Mountains, and encompasses Denver, the large brown-gray smudge near the bottom of the image.

Science and Exploration
Nectaris Fossae And Protva Valles On Mars

Earth
Kolkata, India As Seen From Space By Copernicus Sentinel-2

Kolkata, India As Seen From Space By Copernicus Sentinel-2