By SpaceRef Editor
June 12, 2012
Filed under Earth, MODIS Image of the Day, NASA MODIS Web, US 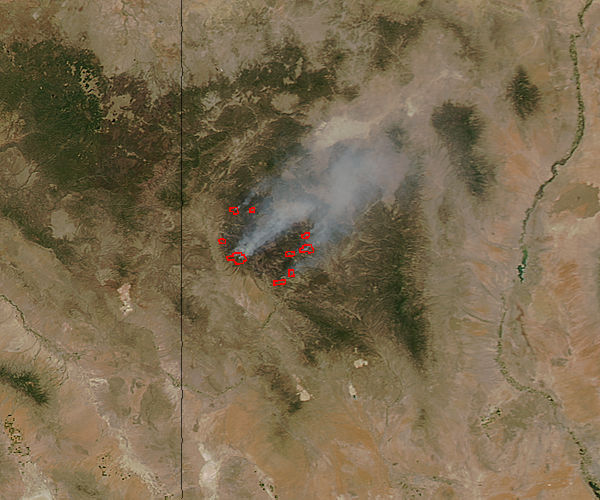 The largest fire in New Mexico’s history, the Whitewater-Baldy Complex Fire, continued to burn in extreme and inaccessible terrain on June 6, 2012. The Moderate Resolution Imaging Spectroradiometer (MODIS) aboard the Aqua satellite captured this true-color image at 20:50 UTC (2:50 p.m. local time). The red “hot spots” ringing the fire are most likely the result of controlled back burns, which are deliberately set fires designed to consume fuel that might feed the wildfires. Without fuel, wildfire becomes slowly contained within the fuel deprived ring, and the extent of the fire is contained. According to Inciweb, by June 11, the Whitewater-Baldy fire had burned more than 278,000 acres, and was 37 percent contained.