NASA MODIS Image of the Day: July 7, 2012 – Eruption of Nyiragongo Volcano, Democratic Republic of the Congo

By SpaceRef Editor
July 7, 2012
Filed under Earth, MODIS Image of the Day, NASA MODIS Web, US 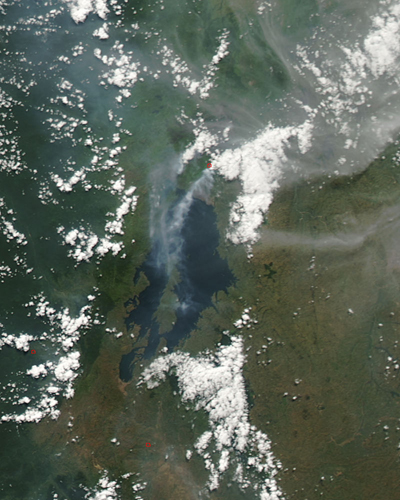 Africa’s Mount Nyiragongo—one of the few volcanoes with a permanent lava lake—recently experienced a surge in activity. Since July 3rd, the Toulouse Volcanic Ash Advisory Center (VAAC) reported a series of ash plumes up to an altitude of 18,000 feet (5,500 meters), which is about 6,500 feet (2,000 m) above the volcano’s 11,384-foot (3,470 m) summit. Nyiragongo frequently emits sulfur dioxide, but ash emissions are unusual. This natural-color satellite image shows emissions streaming southwest from Nyiragongo. The heat form the erupting caldera has been captured by the MODIS instrument, and this thermal anomaly has been marked in red in the image. To the west of Nyriangongo, an additional plume rises from nearby Nyamuragira. Lake Goma lies to the south of both volcanoes. This image was acquired by the Moderate Resolution Imaging Spectroradiometer (MODIS) aboard the Aqua satellite on July 5, 2012.