By SpaceRef Editor
July 5, 2012
Filed under Earth, MODIS Image of the Day, NASA MODIS Web, US 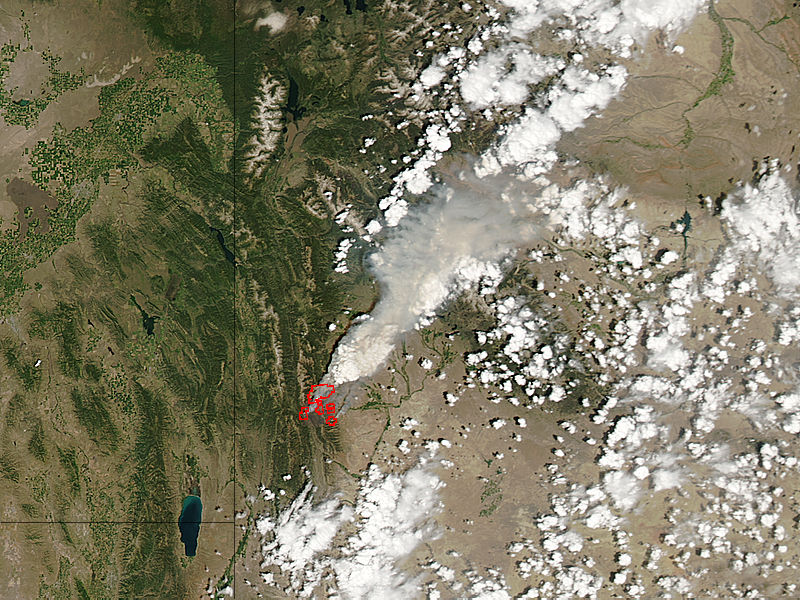 Smoke continues to pour from the growing Fontenelle Fire, in Wyoming. The Moderate Resolution Imaging Spectroradiometer (MODIS) onboard the Aqua satellite captured this true-color image on July 1, 2012. The “hot spot” of the Fontenelle Fire, which marks high temperatures associated with fire activity, is seen near the lower center of the image, surrounded by the dark green of the timberland in which it burns. More arid land, with less ignitable fuel materials, appears tan. Smoke rises from the fire and blows in a north-northeasterly direction, carried by strong winds. The Fontenelle fire ignited on June 24 at approximately 4:00 p.m. local time. It is burning in heavy dead and downed timber in Lincoln and Sublette counties, Wyoming, approximately 17 miles west of the community Big Piney, on the Kemmerer and Big Piney Ranger Districts of the Bridger-Teton National Forest, BLM High Desert Distract and state/private lands. By the morning of July 4, the fire had consumed 56,719 acres and, according to Inciweb, was only 15% contained. The blaze had exhibited extreme fire behavior in the previous 24 hours, with running fire in grass and sage, timber crown fire runs and spotting up to 1/2 mile observed. Gas, oil and helium production facilities are in the area, and these have been shut down by the fire, creating a significant economic impact to these industries.