By SpaceRef Editor
July 3, 2012
Filed under Earth, MODIS Image of the Day, NASA MODIS Web, US 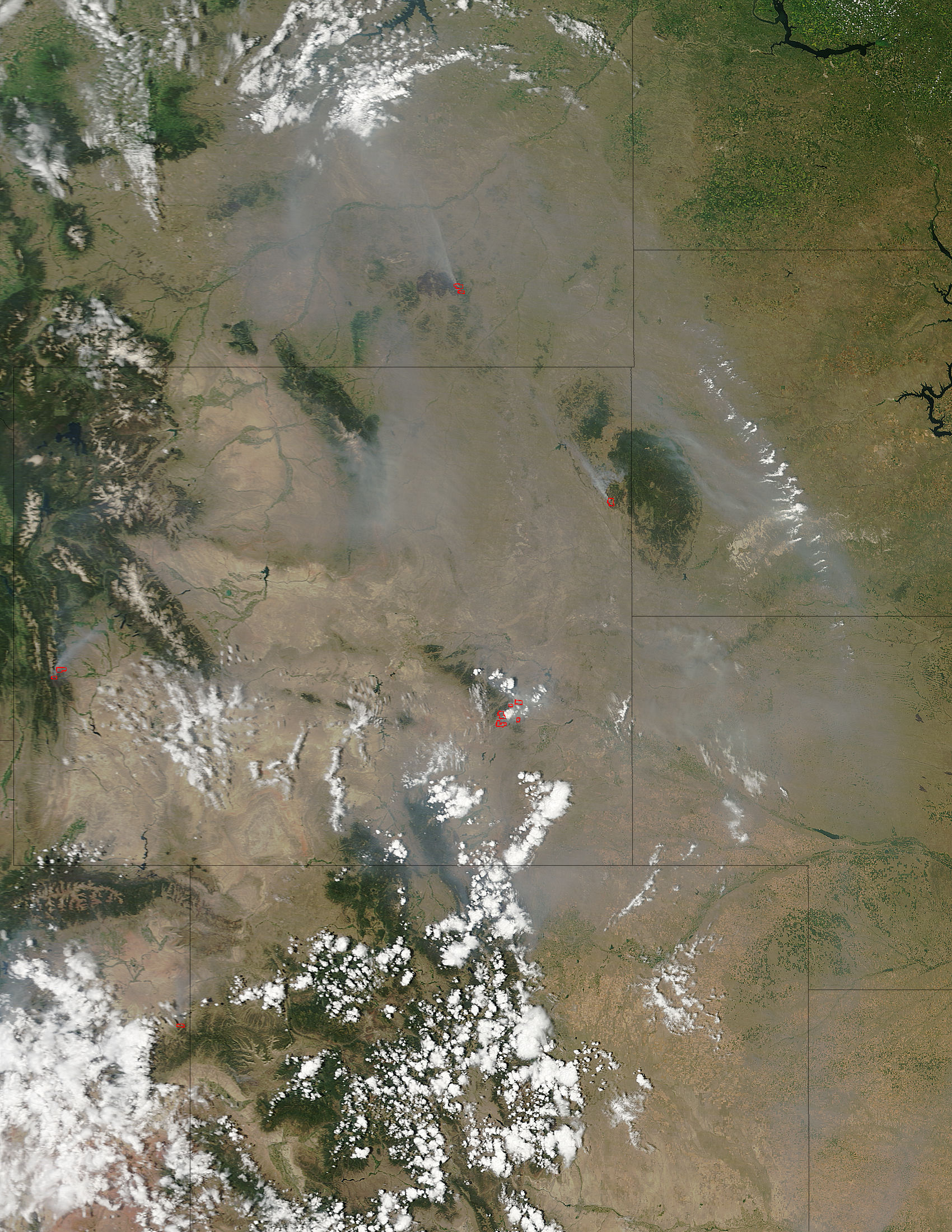 Multiple wildfires in western United States continue to pour smoke into the skies across the region. The Moderate Resolution Imaging Spectroradiometer (MODIS) aboard NASA’s Terra satellite captured this true-color image of the smoky scene on July 1, 2012. On the day this image was acquired, wildfires were on the decline in Arizona and New Mexico (not seen in this image), continuing in Colorado, and on the rise in Wyoming and Montana. The Ash Creek Complex fire burning in Montana’s Custer National Forest was the largest, at 170,000 acres. On July 1, fanned by steady winds of 20-25 mph, gusting to 50 mph, this fire jumped Highway 212 west of Suicide Pass and was on the move towards the southeast, causing evacuations in that area. At 40% contained, the risk of growth of this fire is considered “extreme”. In Wyoming, the Arapaho Fire had continued to burn after consuming 75,051 acres, while the nearby Russells Camp Fire was deemed 100% contained. To the west, the Fontenelle Fire had an extreme day, with running fire reported in grass and sage, and timber crown fires also running. Spotting up to a ½ mile was also reported. Thunderstorms and cloud cover over some Colorado flames have helped firefighting efforts and decreased fire intensity. On July 1, the High Park fire in Colorado was reported as 100% contained, although the fire continues to smolder after burning 87,284 acres and destroying at least 259 homes, with one death. On July 2, the Waldo Canyon fire was estimated at 55% contained after burning 17,827 acres. Over 1,500 personnel continue to fight that blaze. Utah’s largest fire is the Clay Spring fire, located in the western part of the state (not visible in this image). As of July 2, it had burned 99,671 acres of timber, grass, brush and pinyon juniper. Started on June 27 by human activity, it is only 5% contain and is showing extreme behavior; spread is expected. According to The Wildlife News, 21 of Utah’s 22 wildfires this year have been started by target shooting where there are rocks located in dry grass. Shells hitting rock can cause sparks, which can ignite dried grass. There were 20 such fires ignited in 2010 and 24 in 2011. Utah state law makes any regulation of firearms difficult, so target shooting cannot be banned even under extreme fire conditions, but officials are urging everyone to practice responsible shooting.