By SpaceRef Editor
July 16, 2012
Filed under Earth, MODIS Image of the Day, NASA MODIS Web, US 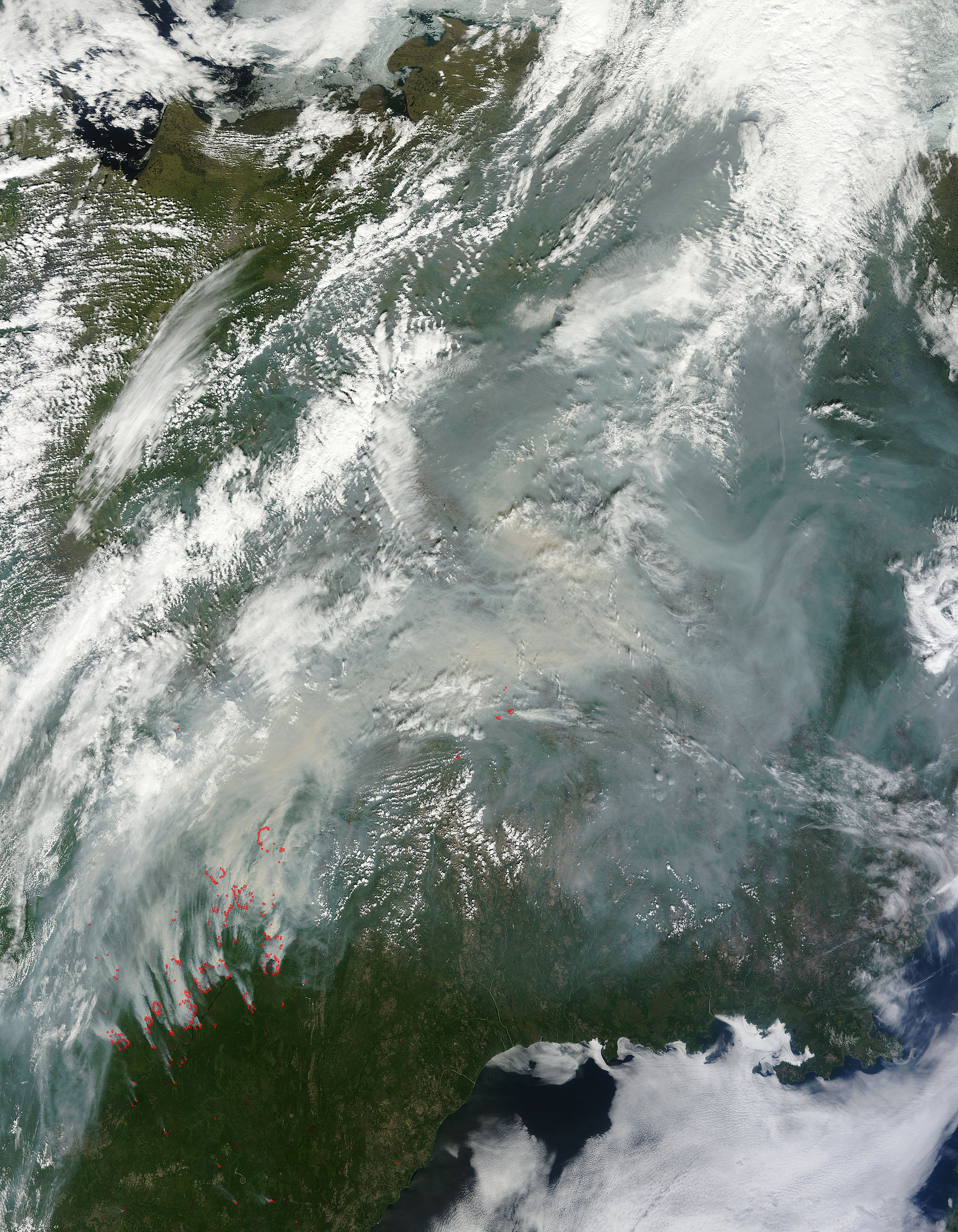 Fires still burned in Eastern Russia in mid-July, 2012, consuming thousands of hectares of boreal forest. The Moderate Resolution Imaging Spectroradiometer (MODIS) flying aboard the Terra satellite acquired this true-color image of the ongoing Russian wildfires on July 12, 2012 at 02:15 UTC (July 11 at 10:15 pm EDT/U.S.) The instrument’s thermal sensors detected heat signatures in multiple locations, and these appear in red in the image. When combined with smoke, such signatures indicate active fires. According to Wunderground.com, Russian firefighters have been battling huge blazes in Siberia for months. Central Russia experienced record warm temperatures 11 – 12°F (6 – 7°C) above average during June, feeding fires that have burned more area in 2012 than in 2010–the year of the unprecedented heat wave that killed over 55,000 people. The smoke from these wildfires were caught by the jet stream and have blown all the way to British Columbia, Canada and Seattle, Washington causing heightened amounts of air pollution, hazy days, and, the strangely positive side effect of amazingly brilliant sunsets. In this image, the Sea of Okhotsk lies in the southeast corner of the image, and is covered with bright white clouds. Many of the numerous fires appear to be burning near the Aldan River, primarily in the Sakha Republic. Strong winds blow the thick plumes towards the north and northwest, where dark tan plumes merge and spread across the region. On the day this image was captured, a small team of international scientists, 3 from NASA Goddard Space Flight Center in Greenbelt, Maryland and 3 from the Sukachev Institute of Forest in Krasnoyarsk, Russia were on the ground in north eastern Siberia to study biomass and carbon in the larch taiga, as well as to gather data for fire return studies in the area. They expedition is located roughly in the far northwest of this image, and their study area is currently free of fire. Their adventures can be followed from their blog, Siberia 2012: Embenchime River Expedition, located at earthobservatory.nasa.gov/