By SpaceRef Editor
July 12, 2012
Filed under Earth, MODIS Image of the Day, NASA MODIS Web, US 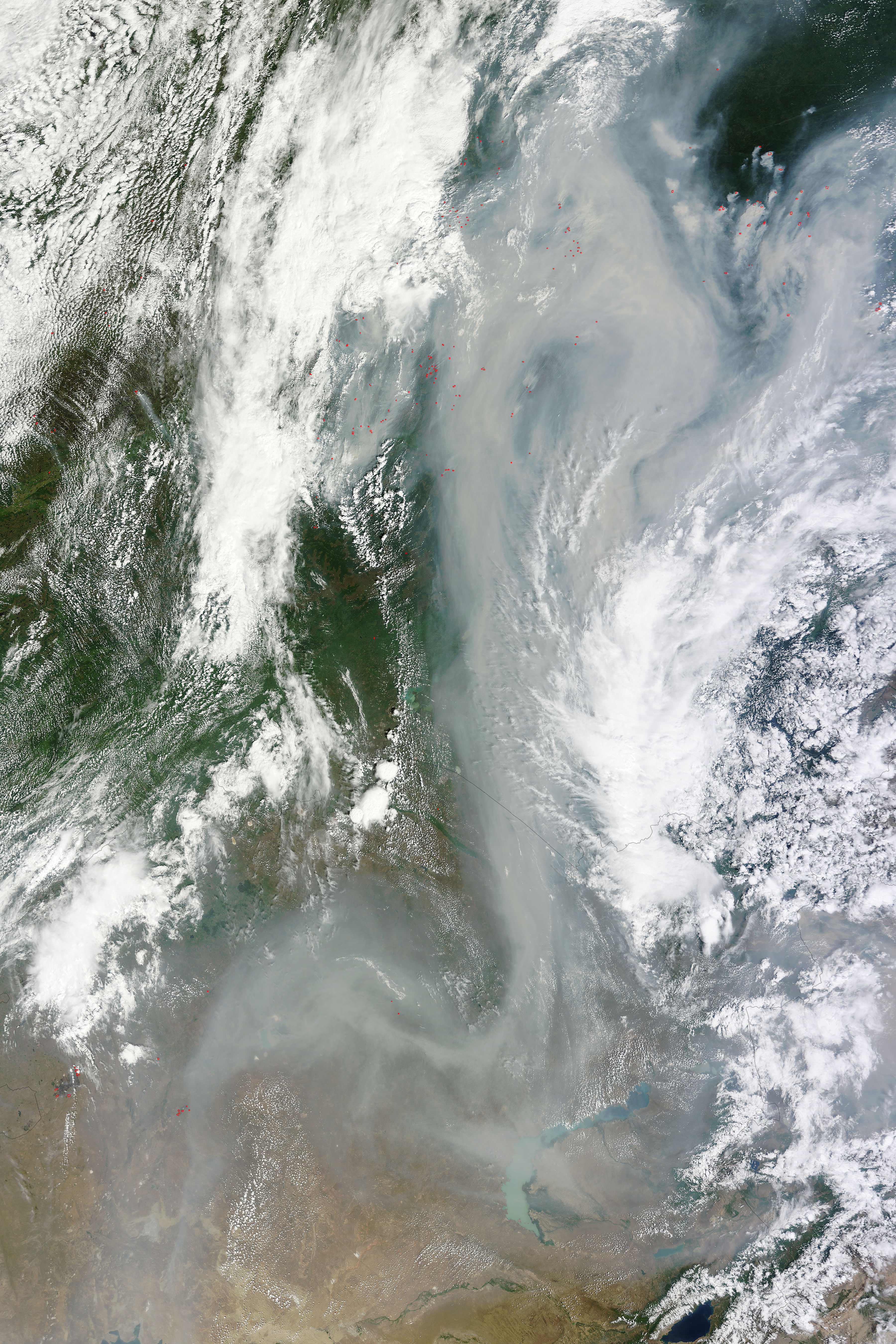 Hundreds of wildfires continued to burn across central and far eastern Russia in early July, 2012, engulfing thousands of hectares of boreal forest in flame. The Moderate Resolution Imaging Spectroradiometer (MODIS) aboard NASA’s Terra satellite captured this true-color image of dozens of blazes across central Russia on July 6 at 06:15 UTC (1:15 p.m. in Tomsk local time). In this image, a river of smoke pours across central Russia and southward over Kazakhstan and China. Clusters of fires blaze in the taiga north of the city of Tomsk, located under thick smoke just north of the center of this image. Just a few hours after this image was captured, on the evening of July 6, two NASA scientists, Dr. Jon Ranson and Dr. Ross Nelson, flew above this smoky scene, traveling from St. Petersburg (to the west of the image) to Krasnoyarsk (to the east of the image) to embark on an international scientific expedition to study, among other things, the fire-return interval (the amount of time that elapses between fires in a given area) in the far northern larch forests. On July 9, he posted the experience in his blog: “We left St. Petersburg near sunset, with the sun low on the horizon. Smoky sunsets create very red skies, and the colors were pretty spectacular…We flew over a huge, curving river of thick smoke. It truly looked like a river flowing, I think, generally north to south. We passed over it from west to east.” The southwest corner of Dr. Ranson’s field study site for 2012 approaches the extreme northeastern edge of this image. In that area, the sky is clear and no fires are evident. In 2010, a historically bad fire year in Russia, he studied the taiga north of Tomsk. That general area is blazing in this image. On July 11, the Russian Federal Forestry Agency reported that more than 25,000 hectares (97 square miles) of forest were burning. Fires had consumed 10,500 hectares in Krasnoyarsk Krai, 6,300 hectares in Tomsk Oblast and 2,400 hectares in Yakuti. Large fires also burned in in Yugra, Sakhalin, and Khabarovsk. Russian firefighters have battled uncontrolled fires for months. According to the environmental group Greenpeace, more land in Russia had burned in 2012 than in 2010, a year that intense wildfires affected western Russia. Dr. Ranson’s blog appears on the Earth Observatory website, and can be followed at www.earthobservatory.nasa.gov .