By SpaceRef Editor
July 11, 2012
Filed under Earth, MODIS Image of the Day, NASA MODIS Web, US 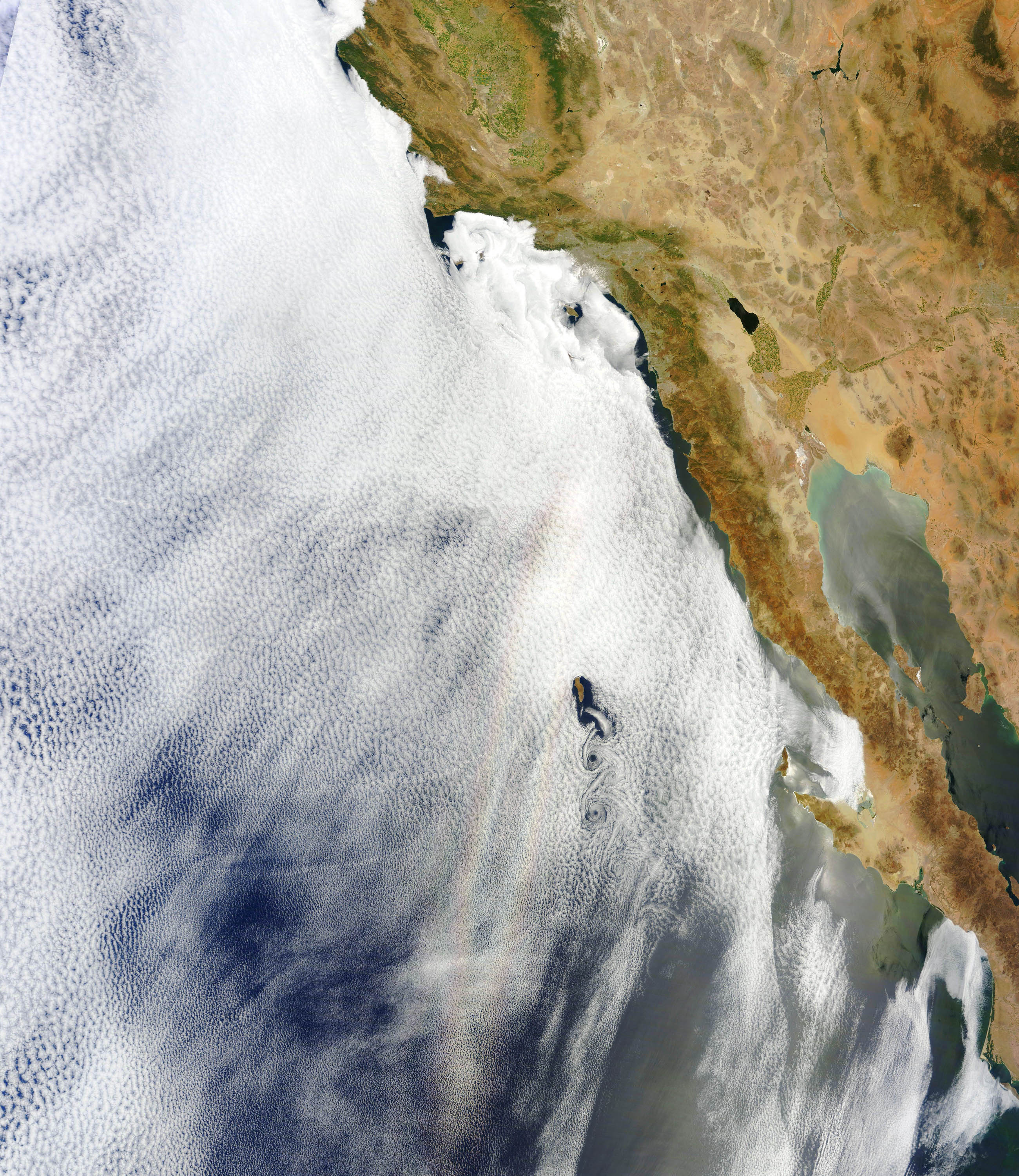 A layer of stratocumulus clouds over the Pacific Ocean served as the backdrop for this rainbow-like optical phenomenon known as a glory. Glories generally appear as concentric rings of color in front of mist or fog. They form when water droplets within clouds scatter sunlight back toward a source of illumination (in this case the Sun). The Moderate Resolution Imaging Spectroradiometer (MODIS) on NASA’s Terra satellite acquired the image on June 21, 2012. The glory can be seen running in a north to south arc above the clouds west of the swirling von karman vortices that trail through the clouds on the lee side of Guadalupe Island. The image was saturation-enhanced to make the glory effect more visible. Although glories may look similar to rainbows, the way light is scattered to produce them is different. Rainbows are formed by refraction and reflection; glories are formed by backward diffraction. The most vivid glories form when an observer looks down on thin clouds with droplets that are between 10 and 30 microns in diameter. The brightest and most colorful glories also form when droplets are roughly the same size. From the ground or an airplane, glories appear as circular rings of color. The space shuttle Columbia observed a circular glory from space in 2003. In the image above, however, the glory does not appear circular. That’s because MODIS scans the Earth’s surface in swaths perpendicular to the path followed by the satellite. And since the swaths show horizontal cross sections through the rings of the glory, the glory here appears as two elongated bands of color that run parallel to the path of the satellite, rather than a full circle. Glories always appear around the spot directly opposite the Sun, from the perspective of the viewer. This spot is called the anti-solar point. To visualize this, imagine a line connecting the Sun, a viewer, and the spot where the glory appears. In this case, the anti-solar point falls about halfway between the two colored lines of the glory. Glories are usually seen against a background of white clouds. Clouds are white because the sunlight is scattered many times by multiple droplets within the clouds. The white light often obscures details of glories, but without them in the background, the glory would not be visible.