By SpaceRef Editor
January 22, 2013
Filed under Earth, MODIS Image of the Day, NASA MODIS Web, US 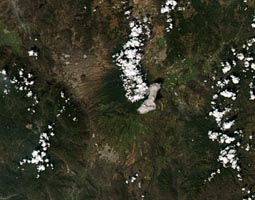 In early January, 2013, Mexico’s Colima volcano abruptly awoke, sending a column of ash 3 kilometers (1.86 mi) into the air. NASA’s Aqua satellite was passing over the region during the eruption, allowing the Moderate Resolution Imaging Spectroradiometer (MODIS) flying aboard to capture this true-color image at 20:10 UTC (3:10 p.m. EST/US) on January 6. Puffs of white cloud cover much of the summit of the Colima volcano, while the large gray ash plume can be seen to the southeast of the clouds. The Colima volcano is one of the most active in Central America, and has been in near-constant activity since 1994. It has had more than 30 eruptive periods recorded since 1585, and several large eruptions in the late 1990s. It has been relatively quiescent since 2011, with the January 6 explosion marking a new eruptive phase. Since that date, a second eruption occurred on January 10, which destroyed a lava dome in the summit crater that had been in place since 2007. A third, and milder, eruption was reported to have occurred on January 13. According to Volcano Discovery, these triple eruptions have expelled approximately 1.5 million cubic meters of volcanic material that was part of the old dome and left a new crater of 220 m diameter inside the 420 m wide summit crater.