By SpaceRef Editor
December 22, 2012
Filed under Earth, MODIS Image of the Day, NASA MODIS Web, US 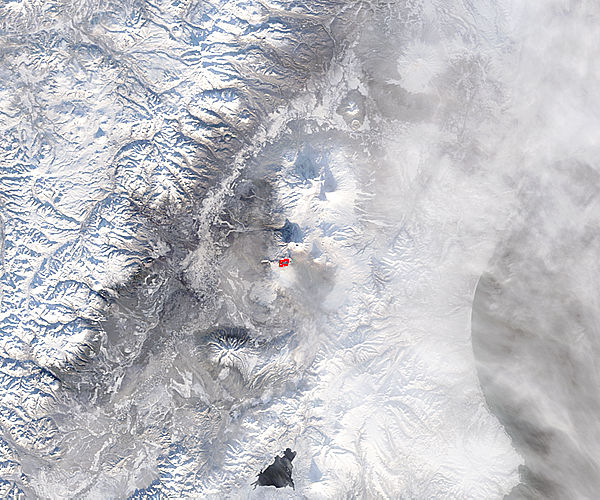 On November 27, 2012 Russia’s Plosky Tolbachik volcano violently awoke after 36 years of rest, sending ash 10,000 meters (32,808 ft) in the air and filling the caldera with fresh and gushing lava. Heavy ash fall, reported as thick as 4 cm (1.6 in) thick, fell in Krasny Yar, which lies about 35 km (21 mi) from the volcano. Lava flows up to 16 km (10 mi) long were reported pouring from the slopes. Almost a month later, on December 21, the eruption continued at full force. On that day, the Kamchatka Volcanic Eruption Response Team (KVERT) reported that effusion of lava continued from the southern fissure at Tolbachinsky Dol, with very fluid lava moving to the western side. A fifth cinder cone was growing, and gas-steam plumes rose to 3-4 km (1.8 – 2.5 mi). Volcanic tremor had increased over the last several days, and KVERT noted that a gigantic thermal anomaly was noted in satellite images in the northern area of Tolbachinsky Dol all week. Tolbachinsky Dol is a large, mostly treeless lava plateau that descends gradually for 25 km (15.5 mi), and has been heavily affected by both ash fall and lava flow from the volcano from the early Holocene to recent times. The Moderate Resolution Imaging Spectroradiometer (MODIS) aboard the Terra satellite captured this true-color image of Plosky Tolbachik on December 12, 2012. On this image, the thermal anomaly is clearly seen marked in red against the white snow. The current eruption shows no sign of slowing down, and is expected to continue at or near the current intensity over the next two weeks, possibly more.