By SpaceRef Editor
December 21, 2012
Filed under Earth, MODIS Image of the Day, NASA MODIS Web, US 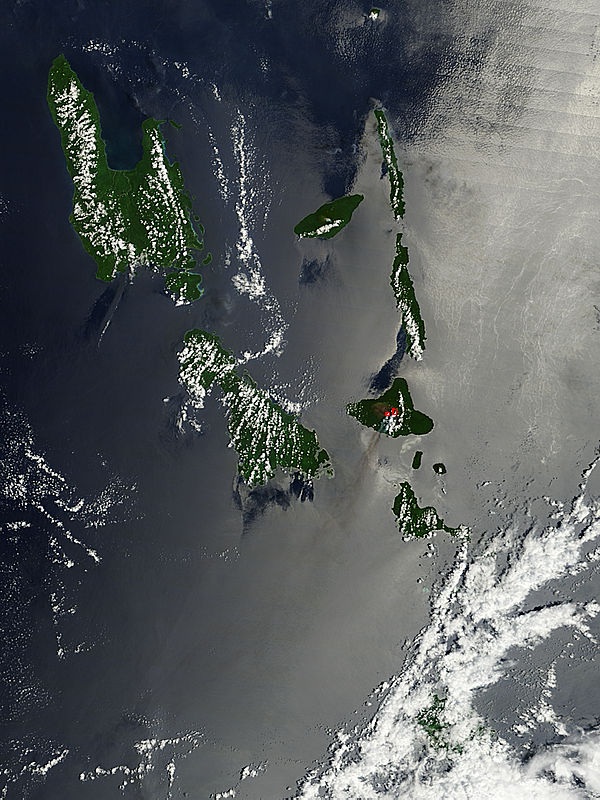 Ambrym Island, located in Vanuatu, is home to one of the most active volcanoes in the world. Ambrym contains active lava lakes within the caldera and frequently emits plumes of sulfurous gas and steam. Lava lakes brimming with steaming lava often have a partly solid crust that forms as the surface lava contacts the cool atmosphere. The crust is rarely more than 5 to 30 centimeters (2 to 12 inches) thick and usually lasts just a few hours because it continually circulates, breaks, and sinks into the molten lava below. The Moderate Resolution Imaging Spectroradiometer (MODIS) aboard NASA’s Terra satellite captured this true-color image of the island nation of Vanuatu on December 11, 2012. A large red hotspot, which indicates an area where the thermal sensors on the MODIS instrument notes temperatures larger than background, marks the roiling lava lakes of Ambrym volcano. The green island nation stands out in stark relief against a silvery ocean. The silver color is not the natural color of the ocean, but is a result of sunglint – a mirror-like reflection of light off the surface of water in a satellite image. Ambrym is a large basaltic volcano with a caldera that is about 12 kilometers (7 miles) wide. Ambrym has existed for about 2,000 years; the most active vents—Marum and Benbow—have been roiling for the past 300 years. Ambrym volcano was first climbed in the late 1800’s and produced destructive eruptions in 1894, 1913, 1929, and 1951.