By SpaceRef Editor
December 18, 2012
Filed under Earth, MODIS Image of the Day, NASA MODIS Web, US 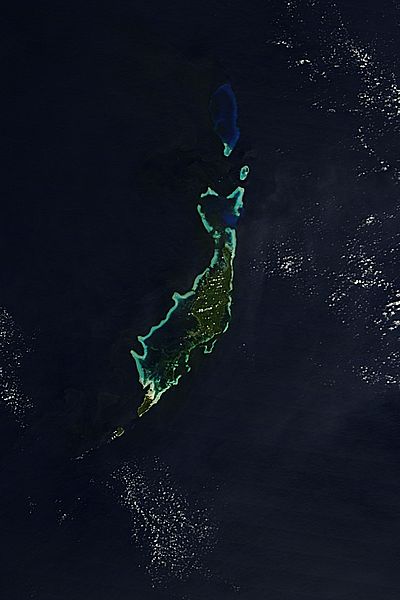 The Republic of Palau, a chain of islands at the far western end of Micronesia, consists of nine inhabited islands and more than 700 small islets in the Philippine Sea. The archipelago contains a range of geological features but, when viewed from above, it’s the archipelago’s many turquoise coral reefs that command attention. The island chain is comprised of 458 square kilometers (177 square miles) of dry land, and approximately 525 square kilometers (203 square miles) of reefs spread through the ocean. The Moderate Resolution Imaging Spectroradiometer (MODIS) on NASA’s Terra satellite acquired this view of Palau on December 11, 2012. Scientists divide coral reefs into the three main types. About half of Palau’s reefs—102 square kilometers—are barrier reefs. These appear in long stretches along island coastlines, separated from the shoreline by a channel of deep water. The western side of Babeldaob, Palua’s largest island, has a well-developed barrier reef system that extends about 150 kilometers (93 miles); the eastern side has some barrier reefs near the southern part of the island, but they are less developed and have gaps. Palau’s second most common type of reef—“fringing”—accounts for about 37 percent of the country’s total reef area. Unlike barriers, fringing reefs develop adjacent to islands with little or no separation from the shore. Palau is home to several fringing reef systems, but one of the most prominent is attached to Peleliu, an island south of Babeldaob made famous by the battle fought there during World War II. There are also extensive fringing reefs along the eastern edge of Babeldaob, particularly in the northern part of the island. Atolls are the third most common type of reef in Palau’s waters. Atolls are isolated coral islands that often encircle a lagoon. About 12 percent—65 square kilometers—of Palau’s coral reefs are considered atolls. There are a few examples of atolls north of Babeldaob. The northernmost is mainly submerged, while the atoll just south of that has four small coral islets that are part of Kayangel atoll.