By SpaceRef Editor
December 15, 2012
Filed under Earth, MODIS Image of the Day, NASA MODIS Web, US 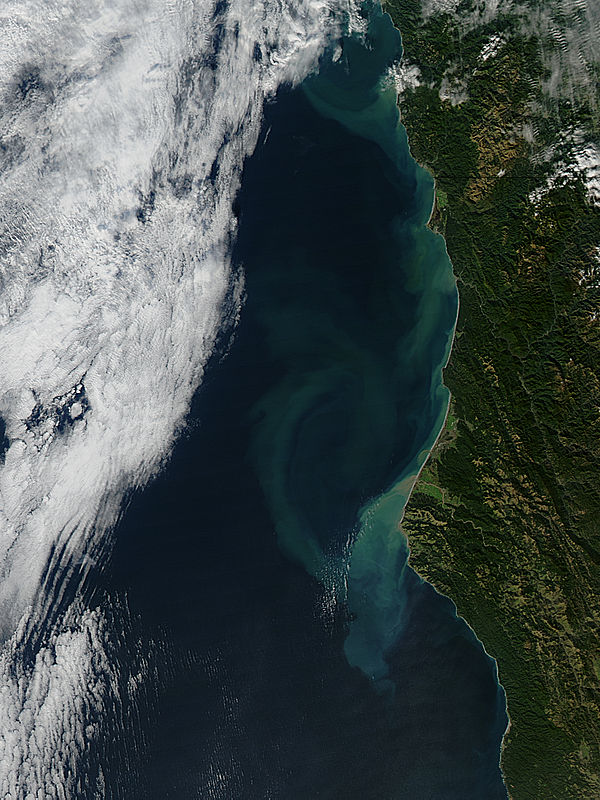 Heavy rains poured over northern California in late November and early December 2012, washing soil and sediment into swift and swollen rivers and then into the Pacific Ocean. Although the flooding was not generally destructive, many roads and highways were closed temporarily as rivers and creeks flowed over them. The sediment stirred up by the flooding, and carried to sea by rivers, stained the ocean waters for hundreds of miles along the coast and far off California shore. The Moderate Resolution Imaging Spectroradiometer (MODIS) aboard NASA’s Aqua satellite captured this true-color image on December 9, 2012. Several large storms blew through northern California within a few weeks, bringing heavy rain to both inland and coastal California. Some of the largest storms passed between November 26 and December 2. The heaviest rainfall — more than 250 millimeters (10 inches) fell across parts of coastal northern California, from south of Eureka to the Oregon border, and also along the inland mountains from near the Oregon border south of San Francisco Bay. The surge of rainfall, combined with normal geological processes, put unusually high loads of sediment into the region’s rivers, especially the Eel River, which pours into the Pacific Ocean well south of Eureka. The river runs through shale and sandstone rocks that are easily worn away, or eroded, by water running over them. The river also flows through many steep valleys that are prone to landslides, allowing large amounts of sediment to be dumped directly into the streams that feed the river. In this image, the sediment plume created by the Eel River can be seen pouring southward off the coast of California near the lower third of this image.