By SpaceRef Editor
April 2, 2013
Filed under Earth, MODIS Image of the Day, NASA MODIS Web, US 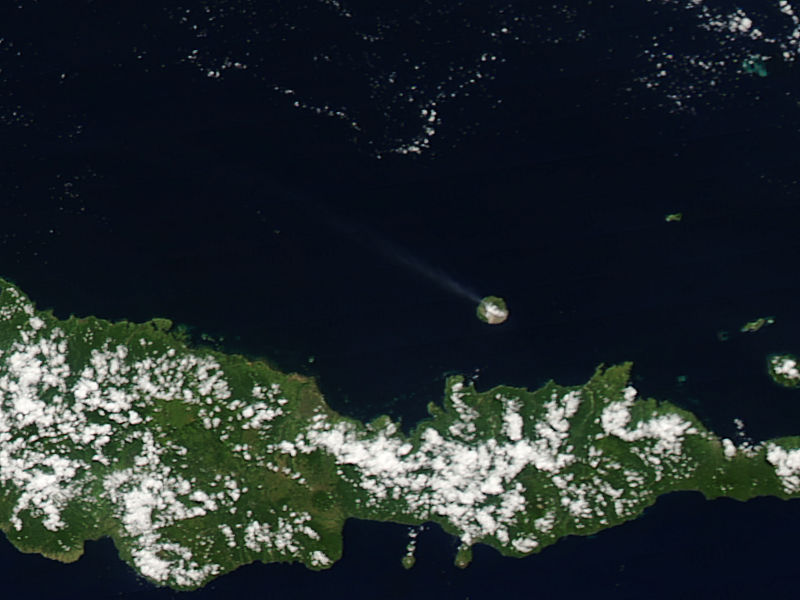 The restless Paluweh volcano continued to emit ash plumes on a near daily basis throughout March 2013. The Darwin Volcanic Ash Advisory Center (VAAC) reported that during March 19-21 and during March 24-26 ash plumes rose to an altitude of 3 km (10,000 ft) above sea level and drifted 55 – 335 km to the SW, WSW, W, NW and NE. NASA’s Aqua satellite flew above Indonesia on March 21, allowing the Moderate Resolution Imaging Spectroradiometer (MODIS) onboard to capture this true-color image. Paluweh can be seen near the center of the image, with a long gray ash plume being carried to the northwest across the Flores Sea. Paluweh, also known as Rokatenda, is located on one of Indonesia’s Lesser Sunda Islands, which are a group of islands located south of Southeast Asia and north of Australia. The island called Palu’e is home to the 875 m (2,781 ft) volcano, and is sparsely inhabited. The volcano’s most powerful eruption occurred in 1928, when an explosive eruption sparked landslides, which in turn triggered tsunamis. Currently, the lava dome remains very active, with effusive-explosive activity continuing on a near daily basis. This activity includes ash venting, rockfalls, and pyroclastic flows from the dome. The ash plumes have been rising between 8 – 12,000 feet above sea level frequently in the last month.