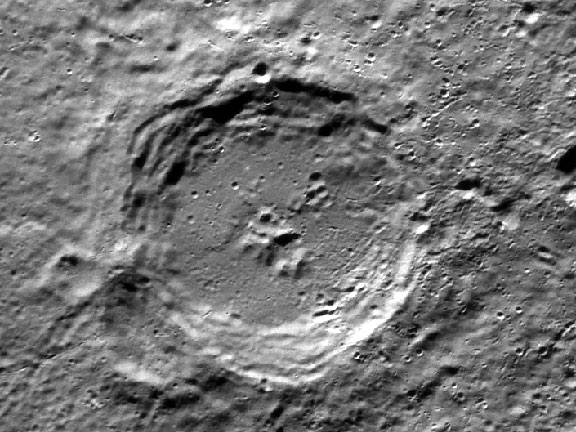 Of Interest: The crater at the center of this image is named Dickens, after Charles Dickens, the English novelist who lived from 1812 to 1870. Among Dickens’ famous works is A Christmas Carol, the story of a horrible boss (Mr. Scrooge), his employee Bob Cratchit, and Bob’s family. Scientists studying Mercury might consider the Mariner 10 mission to be Christmas Past, MESSENGER to be Christmas Present, and the European BepiColombo mission to be Christmas Yet To Come.

The MESSENGER spacecraft is the first ever to orbit the planet Mercury, and the spacecraft’s seven scientific instruments and radio science investigation are unraveling the history and evolution of the Solar System’s innermost planet. Visit the Why Mercury? section of this website to learn more about the key science questions that the MESSENGER mission is addressing. During the one-year primary mission, MDIS is scheduled to acquire more than 75,000 images in support of MESSENGER’s science goals.