While driving eastward toward the northwestern flank of “McCool Hill,” the wheels of NASA’s Mars Exploration Rover Spirit churned up the largest amount of bright soil discovered so far in the mission. This image from Spirit’s navigation camera, taken on the rover’s 787th Martian day, or sol, of exploration (March 21, 2006), shows the strikingly light tone and large extent of the deposit.

A few days earlier, Spirit’s wheels unearthed a small patch of light-toned material informally named “Tyrone.” In images from Spirit’s panoramic camera, “Tyrone” strongly resembled both “Arad” and “Paso Robles,” two patches of light-toned soils discovered earlier in the mission. Spirit found “Paso Robles” in 2005 while climbing “Cumberland Ridge” on the western slope of “Husband Hill.” In early January 2006, the rover discovered “Arad” on the basin floor just south of “Husband Hill.” Spirit’s instruments confirmed that those soils had a salty chemistry dominated by iron-bearing sulfates. Spirit’s miniature thermal emission spectrometer is analyzing this most recent discovery, and researchers will compare it with those other deposits.

These discoveries indicate that light-toned soil deposits might be widely distributed on the flanks and valley floors of the “Columbia Hills” region in Gusev Crater on Mars. The salts may record the past presence of water, as they are easily mobilized and concentrated in liquid solution. 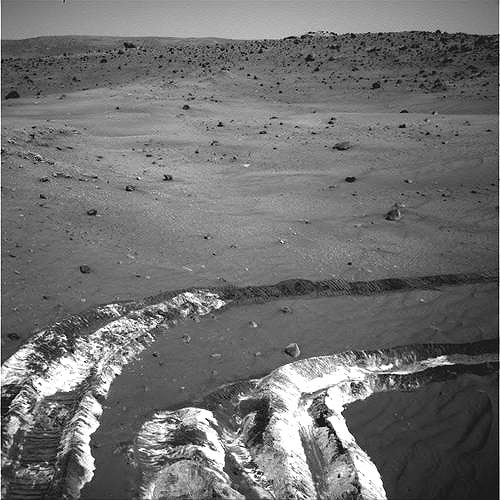