As NASA’s Mars Exploration Rover Spirit continues to explore the “Columbia Hills” within Gusev Crater, scientists are planning to take a closer look for layered rocks in a steep valley straight ahead before directing the rover to turn south toward the summit of “Husband Hill.” Two of the geologic formations the six-wheeled robotic geologist has discovered during 2004 are shown here. One is labeled “Columbia Hills material,” representing bedrock of the higher slopes and peaks, and one is labeled “transition zone material,” representing rocks that are gradational in character and composition between the hills to the east and the plains to the west. The map also shows Spirit’s line of travel through the rover’s 344th martian day, or sol (Dec. 21, 2004), beginning on the left edge at about the 182nd sol (July 7, 2004). 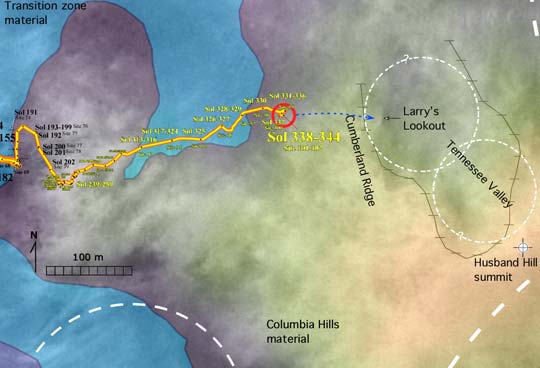